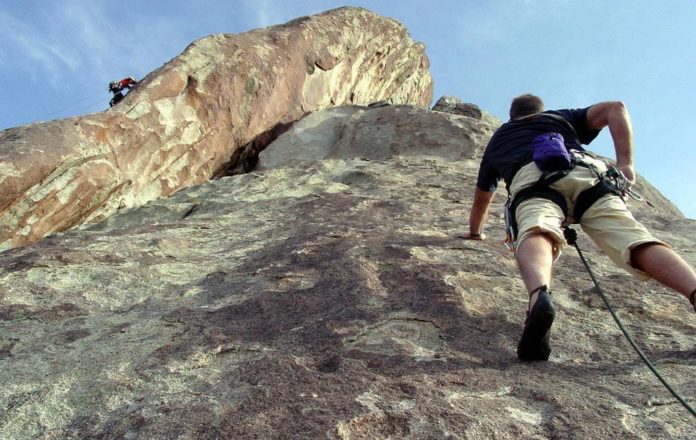 Rock climbers should include learning how to rest effectively in any climber workout plan. Learn how to use a climbing resting technique to get better at climbing, now.

In addition to training other common climbing techniques, rock climbers should learn how to employ on-route resting to improve climbing performance. A climber can develop more comfort with an understanding of his or her ability to rest and recover mid-climb by incorporating training on how to rest into a rock climbing workout program. This often-overlooked rock climbing technique can prove invaluable in successfully onsighting and redpointing rock climbing routes.

As with training climbing footwork, start training climbing resting technique on a relatively easy route. First, find handholds that are large enough to relax on. Then, attempt to find a body position oriented directly underneath these handholds that enables at least one (optimally both) arm(s) to straighten out completely. Often, this will involve having the legs either quite bent in order to hang body weight down or else, spread out and relatively straightened to evenly distribute body weight.

From this position, try to let go and shake out one hand, and then the other. Be aware that sometimes, it will be necessary to change the body position completely in order to let go with one hand and shake it out, and then switch to the other hand. Learn to find these positions efficiently and to chalk up with the hand that’s off the hold, while simultaneously internally reviewing the upcoming climbing sequences.

The Reasons for Training Resting for Climbing

If a climbing rest on a route is good enough, a climber can actually slow down his or her breathing and heart rate, often reducing or eliminating much of the pump or fatigue from his or her arms. The climber can use this relative downtime to review the next moves (if they’re attempting a redpoint), or else to try to figure out and assess the upcoming sequence (if they’re attempting an onsight).

As the climber refines resting as a climbing technique, they will learn the subtle differences between the perfect amount of on-route rest and too much rest, or the point when the “resting” actually starts to fatigue the climber even more. This happens when a climber spends so much time hanging out in a perceived resting spot that he or she begins to fatigue out of the effort of staying in the rest position.

One helpful tactic in refining resting as a climbing technique involves thinking of different rest spots as correlating with a specific number of breaths or counts. This means that some climbing rests will be a quick three-breath rest, while others will allow the climber so much potential recovery that they can count to 100, allowing the breath and heart rates to decrease and the arms to de-pump. Most rests will fall between these two extremes.

Another tactic involves not taking the full rest during work burns on a route, instead of resting only briefly (say, a 10-count rest instead of a 50-count rest) before continuing to climb. Then, when attempting to redpoint the route, the climber takes the full rest. Often, this makes the remainder of the route feel easier than ever before, due to the greater recovery time. This only works if the rest is truly restful, though, as described above.

Include Resting in a Climber Workout Plan to Improve Rock Climbing