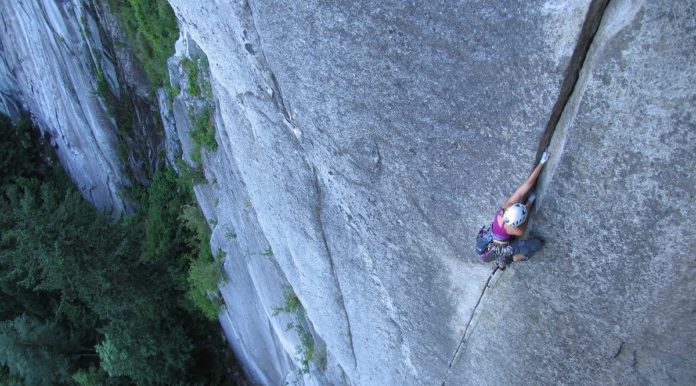 With a wide array of outdoor activities like skiing, canoeing, mountain biking, and horseback riding, it’s no wonder Squamish, British Columbia calls itself the “outdoor recreation capital of Canada.” Outdoor enthusiasts can fish, golf and windsurf (the town’s name means ‘Mother of the Wind’ in Coast Salish).

But one of the main reasons outdoor enthusiasts from all over the world are lured to this exciting place is that it has some of the best rock climbing on the continent. Squamish, which is less than an hour’s drive north of Vancouver, is home to the Stawamus Chief, the world’s second largest granite monolith, at 2,100 feet. It is second in line to El Capitan, which stands at a massive 3,593 feet in Yosemite National Park, California.

A Little Something for Every Climber

According to Squamish’s tourism site, people began climbing in the area in the late ’50s and ’60s. There are over 1,500 routes on exclusively granite rock, as well as a decent sized bouldering field. There is a little something for every climber in Squamish.

While it’s not possible for a beginner to climb to the top of the Chief (about 15 pitches—some are rated as high as 5.13 or more), it’s viable to make it about halfway up by climbing “The Apron,” which is shallow multi-pitch slab climb.

The Smoke Bluffs, close to downtown Squamish, less than an hour’s walk from the Chief (or an easy hitchhike) are also a great place for beginners to climb. Though, it must be mentioned, that if you’re climbing outside for the first time and typically used to the nice round holds in climbing gyms, this will be a challenge.

Up for a Challenge

The slick granite rock has few ledges and holds. You’re either going to need to jam your fingers and toes into a few cracks or smear like there’s no tomorrow if you have hopes of getting any height.

If you’re a more advanced climber, and it’s sport climbing you’re after, a good bet is Cheakamus Canyon (which is further north from the Chief, in between Squamish and Whistler.)

For climbers who are not so crazy for the heights that the aforementioned rocks provide, another serious selling point for Squamish visitors is the bouldering field, also located at the base of the Chief.

While not as grandiose as France’s Fontainebleau, it is just as friendly. The forest is a massive rock garden covered in beautiful green foliage. The trees provide much-appreciated shelter from the elements (keep in mind British Columbia’s typically rainy climate). Though, if you like, there are still patches where you can climb with the sunshine on your shoulders if you so choose.

Current quirky names for problems include Pulling Teeth, American Gigolo and of course, Bob Barker Cut my Dog’s Nuts Off. It seems there is still much left to be developed. People are continuously inventing new bouldering problems.

Please note that unlike Fontainebleau, if you fall, you won’t land on a cushion of soft sand. You will likely fall onto rocks. For this reason, crash mats can be purchased from one of the two downtown climbing stores. The outdoor retailers also sell shoes, chalkbags, harnesses, climbing guides etc.

On Your Off Time

While downtown you will come across grocery stores as well as a couple of bars: Ocean Port/Chieftain hotel if you’re looking for an interesting night with some locals, and Howe Sound Inn & Brewpub, a relaxing lodge-like establishment that tourists tend to gather in. The small and comfortable downtown centre is lovely. It’s quiet and calm and there is a lot to look at with murals painted on buildings by local artists.