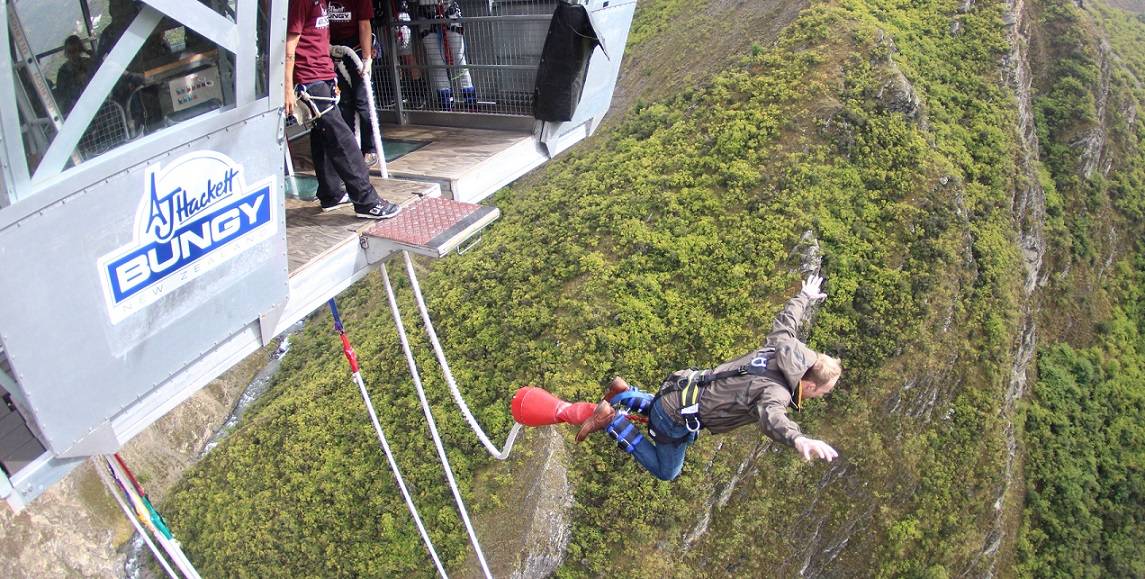 What the US knows as bungee is a proud New Zealand institution in extreme sports-bungy jumping at Kawarau Bridge or from the Nevis Highwire or the Nevis Arc.

New Zealanders lay claim to having invented the extreme sport of bungy jumping—that insane practice of jumping off a perch and free-falling many metres until stopped by an oversized rubber band strapped to the ankles. Thrillseekers in the United States took to the sport with alacrity, changing the spelling to bungee jumping. Of course, the men on Pentecost Island in Vanuatu have been performing this feat as a ritual for several centuries, jumping from high bamboo perches with vines tied to their feet.

The History of Bungy Jumping

In the 1970s, a group of daredevils at Oxford University called the Dangerous Sports Club noted the Pentecost Island ritual and tried a few experimental jumps. New Zealand speed skier A J Hackett saw a video of this and he and friend, Henry Van Asch decided to develop the idea into a sport. They stress-tested latex cord and developed suitable attachments and then made a spectacular leap from Pont de la Caille near Annecy in France. The world sat up and took notice when A J Hackett took on the Eiffel Tower in June 1987.

Hackett started the world’s first commercial enterprise at Kawarau Bridge near Queenstown. This is a 43 metre jump from a platform in the middle of the old bridge which was built in 1880. Here, it is possible to adjust the ropes to ensure a water touch, splashdown or just a plain old dunking in the freezing water.

As the Kawarau Jump Centre is only a few metres off main Highway 6 just north of Queenstown, even through travelers have the opportunity to wheel in and spend half an hour goggling and shuddering as people make the dive and are hauled down with a pole into a waiting boat, where they are unstrapped from the fetters and ferried back to shore. As the Hackett brochure says, viewers are ‘so close you can feel the fear.’ Visitors to the centre can also watch a movie, buy memorabilia and have a snack… and book a jump!

The A J Hackett Bungy Empire

Such was the success of this initial enterprise that the company soon expanded to four New Zealand sites. There is now an urban jump with ‘Sky Swing’ from a mountain ledge high above Queenstown (where the gondola ride is also situated). Another site has been established on the Auckland Harbour Bridge in the country’s major city. This is a 40 metre jump over Waitemata Harbour. The most spectacular and breathtaking addition to the A J Hackett stable was opened in July 1999. This is the Nevis Highwire Bunjy.

This is a major 4- hour excursion in the company’ private 4-wheel drive buses to the Doolan Creek’s Gorge, 40 kilometres from Queenstown. Even spectators are charged $50. The Nevis Bungy, named for the Nevis River over which it is suspended on guy wires, is 134 metres high. Prior to the jump, the cable car ride out to the jump pod is already a heart-stopper.

It gets worse! The most recent innovation sits high above even the Nevis Bungy Jump. The guy wires are 160 metres above the riverbed, and there is a chilling 70 metres walk on a suspension bridge to get to the launch pad. The rope is not tethered to the launch pad, but 120 metres out on the wire at the fulcrum of a giant swing. Thus, the hapless jumper freefalls over 100 metres before the rope kicks in and hurls him, her or them (it’s possible to go tandem) in a giant arc across the valley.

Bungee Jumping in the USA

If traveling to New Zealand is out of reach for you right now, you can choose one of the spots in the USA. Bungee has spread around the world and there are several sites in the United States. The Bungee America company started out in 1989 in California. Its major site is The Bridge to Nowhere. Other bungee jump sites can be found in Dallas, Texas; Pigeon Forge, Tennessee; Mt Hood, Oregon, and Boise, Idaho. The Royal Gorge Bridge Bungee Jump in Colorado is the highest in the world at 321 metres, but is only available for limited use during special events.

Bungee or Bungy jumping stands with base jumping, river boarding and skydiving as the most extreme sports available.

Euro Paddle vs Greenland Paddle: Which is Best for Kayaking?