The Adventurerr
Home Skateboarding Learning How to Kickflip on a Skateboard 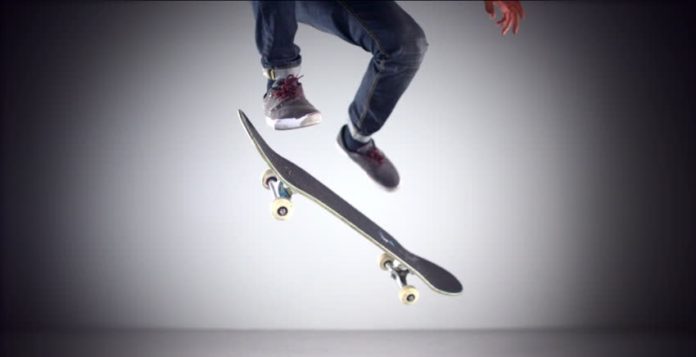 Kickflips are a staple trick on a skateboard that provides a gateway to multiple other technical flat ground tricks.

No one can just teach the kickflip; only suggest foot placement, timing, and the other steps involved. The following are a suggested order of operations for skateboarders who are looking to learn the old standby crowdpleaser: the kickflip.

Place the ball of your of the back foot and toes on the edge of the tail of the skateboard at an angle that is comfortable. Place the front foot a few inches behind the bolts of the front truck at a slight angle pointing toes towards the nose of the skateboard.

Begin by learning them while the skateboard is motionless, this will help to get accustomed to the mechanics of the kickflip. Begin by crouching as if about to ollie. Extend legs quickly and deliberately so that the tail of the deck makes enough contact with the ground to pop the skateboard into the air.

As soon as the tail has made contact with the ground begin sliding the foot up to the nose of the deck. This takes a great deal of timing and can only be achieved successfully through a lot of practice.

Quickly slide the front foot up the deck of the skateboard until it reaches the nose, once it does, use the ankle and flick the foot outwards. This will give the skateboard the rotation it needs to turn over.

Watch the board spin underneath, stay centered over the skateboard so that both feet will land on each set of bolts – this is the best way to prevent the premature breaking of skateboard decks. As soon as the board has made a 360 degree vertical rotation extend the legs once again until they make contact with the skateboard. This is known as “catching” the skateboard. Usually skateboarders catch the board with the back foot, the same foot that popped the tail at the beginning of the process.

After catching the skateboard, you are ready to land the kickflip. Bend the knees a little and prepare to sustain the impact. Once the wheels make contact with the ground bend your knees even more to sustain the remainder of the impact. This becomes especially important when performing kickflips over stairs and gaps.

After mastering the kickflip you may begin to learn different variations: the varial kicklip, 180 kickflips (backside and frontside), and 360 flips are just a few of the many variations. Kickflips can be very difficult to learn, especially because they are one of the first tricks skateboarders try to master. Before beginning to learn the kickflip it is important to be very comfortable riding a skateboard. It is also important to be proficient at performing ollies. Now get out there and skate!