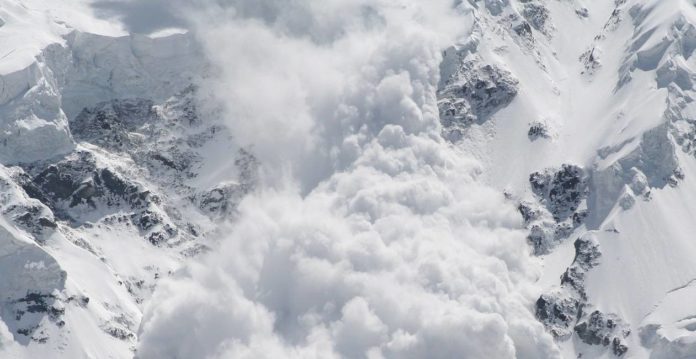 While the experts say a large part of avalanche survival is luck, it help to know how to increase your chances if you’re caught in the snow during an avalanche.

It’s tough to even imagine being in an avalanche, let alone imagining how to react. Anyone who spends any time in the backcountry skiing, snowshoeing or snowmobiling needs to know basic avalanche safety skills and how to survive an avalanche.

If there are new avalanches, more are possible.

2. Signs of unstable snow as you travel

3. Heavy Snowfall or Rain in the Past 24 Hours

Significant snowfall or rain can make the snowpack unstable. Avalanches are often triggered the first clear day after a storm. Because it is sunny does not mean it is safe.

Warm temperatures and gravity can cause the snow to creep downhill and become less stable.

When these are buried in the snowpack, you may trigger an avalanche weeks after a storm or when no other Red Flags are present.
They can be difficult to identify – check the Avalanche Advisory for your area.

Survival Tips During an Avalanche

Survival Tips if Buried in Avalanche

Official rescue teams can take precious minutes to arrive, especially in isolated areas. Survivors should immediately begin looking for anyone buried, it may be the only chance of survival.

It cannot be stressed enough that these are only tips and even following them to the letter does not guarantee safety – it only increases the odds of survival.

Reduce the chances of being in an avalanche — check avalanche reports and mountain conditions before setting out and stay out of bounds areas on ski hills. Know the snow and wind conditions of an area and become familiar with the terrain. Learn to understand where the avalanche dangers are.