Surfboard wax is essential to surfing. It is the link between the deck of your surfboard and your feet. Today’s wax creates a bumpy and sticky surface that allows surfers to perform radical maneuvers without slipping.

Surfboard wax made its debut as candle wax in the early 20th century, but by the 1930s, surfers turned to paraffin wax that was used in canning and available in the cooking section of most grocery stores. It was a far cry from today’s wax in that surfers melted the wax onto the deck of the surfboard.

Next, innovative tinkerers added oils in the 60s to soften the paraffin and create (with the eventual addition of soft beeswax to make the wax more sticky) the precursor to today’s formula. The idea behind this early incarnation was to create bumps that kept the surfers’ feet from moving around.

Today, surfboard wax manufacturers have forgone oils and have turned to chemicals like alcohols and resins, but the goal remains the same: maximum traction.

As the Gidget surf craze took hold, so too did surfboard wax manufacturers that began adding colors and scents to their products to separate themselves from the competition. And that’s where the industry stands today. Wax is essentially the same but the choices and categories have become more and more diverse. At its most elemental, surfboard wax can be divided into three major categories:

1. Traditional wax which is harder and exhibits less stickiness. The goal of traditional wax lies more in creating large nobs of wax to create traction.

2. Very sticky wax which instead utilizes a softer and tackier composition to essentially hold the feet directly on the deck of the surfboard.

3. Base coats which are even stickier and softer than any of the other types of wax, but whose importance will be discussed later.

More specifically, surfboard wax is divided into formulas for different climates and conditions:

Let’s start with the most awesome surfing environment: the tropics. Here, where the water temperatures can reach well beyond the 75 degrees Fahrenheit (23 degrees Celsius) mark and where tropical water wax is your best choice. This wax will remain hard and resist rubbing off your surfboard even in this sultry atmosphere. Use this wax in Puerto Rico or Costa Rica.

As the water becomes cooler, upwards of 78 degrees Fahrenheit (23 degrees Celsius), this formula stays firm and sticky in places like Florida and Hawaii.

This next classification places optimal softness and tackiness at temperatures between 58 and 68 degrees Fahrenheit (14-19 Celsius). As the summertime warm water locales move to wintertime, make your transition to “cool”

The cold water formula is geared for temperatures below 60 degrees Fahrenheit (below 15 degrees Celsius). The idea is that this composition remains soft and sticky even in frigid conditions while traditional wax would become hard and slick. Northern California surfers and those diehard north-eastern snow surfers need this formula.

Here is where this new era of infinite choice comes home to roost in the surf world. The basecoat concept is a new one. The idea is that on a new board (or newly stripped board), a surfer should apply this surfboard wax as a base to allow the next coat of wax to properly adhere. I have gone with and without basecoat and have yet to see a difference, so this may be a sly way of selling more bars of wax because it is definitely not a requirement.

Not all surfboard wax is created equally, and there are so many brands out there that it may be difficult to make a choice. The brands I gravitate towards are Sex Wax and Sticky Bumps which have served me well in all surfing conditions and locations, but you might want to check locally made wax, as well as there, are countless small start-up companies trying to break into the market. If you are still confused, ask a surf shop employee or another local surfer what brand they use.

How to Wax your Surfboard

Watch this video and learn some general techniques for waxing your board.

– Strip your wax off periodically

– Rub your feet on your board before riding a wave to warm up the wax and clean your feet of oils that may affect that first wave. 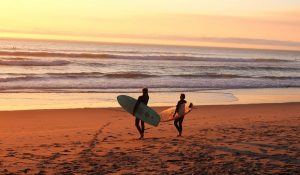 4 Common Mistakes Made by Beginner Surfers

How to Link Maneuvers and Surf With Flow

How to do a Bottom Turn

How to do a Backside Roundhouse Cutback

How to Do a Frontside Air Reverse

How to do a Backside Re-entry 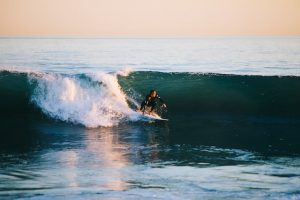 Is Surfing the Right Sport for You?

How to Paddle Better as a Surfer

What is an epoxy surfboard?