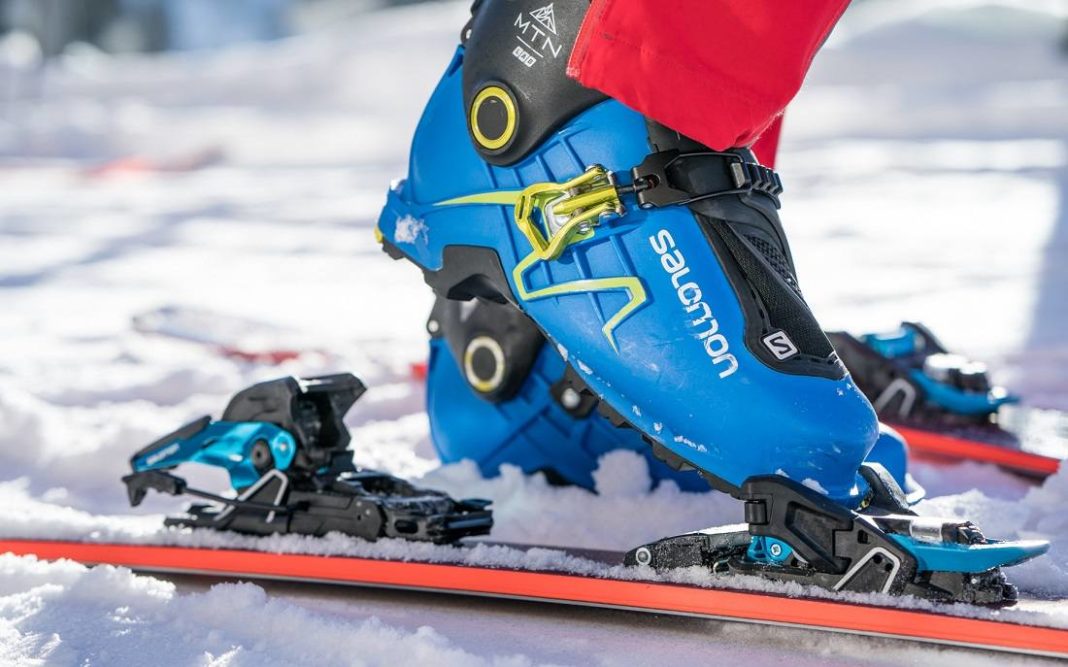 Ski Bindings are essential in Skiing as they form the connection between the Skis and the Ski Boots and thus between your Skis and your body. All the movements and pressures you place on your Ski Boots are directed to your Skis through your Ski Bindings. Modern Ski Bindings also serve a second purpose: to release your Ski Boots when the pressure reaches a predefined level. This makes sure that in a heavy fall, your Skis do not stay attached to your legs. If they would they could serious injuries like fractures and torn ligaments.

Step in Bindings is by far the most common type of Ski Bindings. They use a toe and heel piece which are attached to the top of the Ski. The toe-side piece commonly allows the sideway release and the heel piece allows the upward release. It is very important to know which piece allows for which kind of release. Some toe pieces also allow upward release. Likewise, some heel pieces allow sideways release. The force needed for release can be adjusted.

Ski Bindings use the internationally agreed DIN scale. The DIN scale assures that Ski Bindings worldwide release under the same force. Bindings come in a DIN range where they, for instance, support DIN 3-7.

Setting your bindings to the correct Release Setting is essential for your safety. Dangerous situations can arise on both sides of the setting: if too loose, then the Ski can let go unexpectedly causing a fall. If too tight, then the Ski will not release if you come to a fall causing your Skis to act as levers and increasing your chance of injury. Make sure to check your DIN setting with a qualified technician.

Another important part of a ski binding is the anti-friction-device (AFD). The AFD is a small smooth pad directly behind the toe-side piece that minimizes friction if the toe-side piece is released sideways. You need to make sure that there is at least 1 mm of free space between the sole of your boot and the AFD. Most AFDs simply use a smooth surface but some more advanced models use mechanical moving parts to make sure the boot rolls or glides sideways if needed.

When Skis are released from the bindings they, of course, run the risk of sliding down the slope, increasing in speed and possibly hitting other skiers. To minimize this risk, the bindings have ski brakes. Brakes are levers which flip down the moment a binding is released. In this way, the arms of the brakes dig into the Ski Surface causing the Ski to stop gliding.

The bindings need to stay firmly attached to the Ski even when the Ski bends. If they did not give any lengthways flexibility, then they would jam if the skis were bent. To prevent this, bindings provide adjustable forward pressure. This makes sure that heel piece is pressed forward against the Boot.

For more advanced skiers, it becomes important to dampen vibrations in high-speed descents and carved turns. Many Ski Bindings use rubber or other material to act as vibration dampeners. Some more advanced bindings have more complex mechanisms.

Some Ski Bindings allow you to move your bindings position either more to the front or to the back of your Ski. In this way, you can adjust your body positioning. This can be very helpful for instance when you ski deep Powder Snow Condition and you want your body weight to be more of the back of your Skis to prevent them from digging in the Snow.

Alpine Touring Bindings are bindings that allow the toe to hinge at the toe-side piece and allow the heel to disengage from the Ski all together. This allows for a much more natural walking movement similar to the technique used in Cross-country Skiing. The difference is that the heel-side piece can be locked again, allowing the Ski Binding to be used as a regular step in binding. This combination can be used in alpine skiing and cross-country skiing where walking with Skis on is no longer bothersome.

Bindings are very important in Skiing. As mentioned before, they are Skiing equipment which forms the link between your Skis and your body. There are many factors to consider in choosing the Ski Bindings appropriate for you. In general, make sure you know the Components of the Ski Bindings since they play a big part in your Skiing performance. Moreover, bear in mind that your Ski Bindings must correspond to your Skiing skill so that you will be able to Ski effectively.