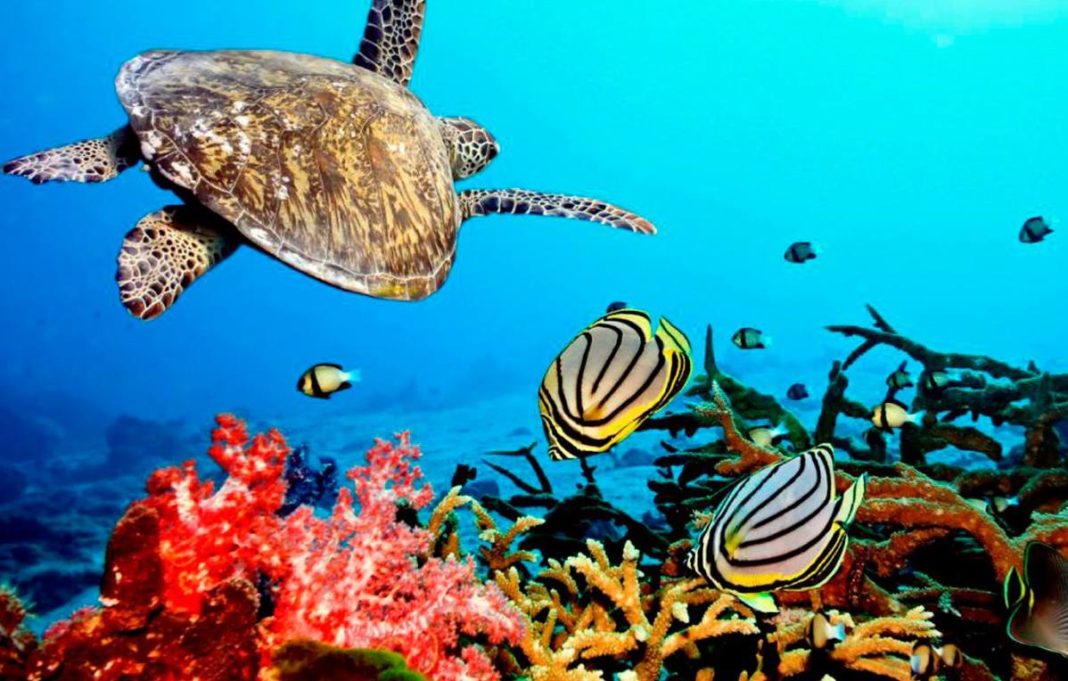 This ‘invitation only’ dive site in Zanzibar presents quite the challenge. For experienced scuba divers the rewards are amazing, just don’t tell anyone

The name “Zanzibar” has become virtually synonymous with everything exotic. Birthplace of rock group Queen’s ex-frontman Freddie Mercury, mention Zanzibar in conversation and instantly images of pristine white sandy beaches, romantic sunset strolls and honeymoon bliss are conjured up. Yet for most people, once the wistful gleam in the eye passes away, there follows the usual question, “Where exactly is Zanzibar?”

Arab traders were the first to realise the commercial potential of Zanzibar in the 8th century AD, but human habitation can be traced back at least 20,000 years. The name “Zanzibar”, which funnily enough when considering the now-famous pristine white sandy beaches, means “black coast”. It was given to the island by an infamous Persian trader in the 18th century. The name, more in reference to the colour of the locals’ skin, reflects a darker period in the history of Zanzibar, when for two centuries under its Omani rulers, the island was a major cog in the wheel of the lucrative slave trade of Arab traders.

These same traders founded plantations, taking advantage of the favourable climatic conditions to grow and trade spices. By the middle of the 19th century, Zanzibar had become the world’s leading producer of cloves. Cinnamon, ginger, cumin and pepper followed and soon the romantic name ‘Spice Islands’ was born. Today Zanzibar is a semi-autonomous part of Tanzania and its Commission for Tourism has laid out a vision for the island to become “one of the top tourism destinations of the Indian Ocean.”

The amazing array of scuba diving in Zanzibar will no doubt play a part if this ambitious goal is to be achieved. With visibility generally between 20-40 metres and average water temperatures of 27 degrees Celsius, Zanzibar diving is reputedly right up there with the very best in the world. Dives here serve up a mixture of the vast shoals of fish one might see off the coast of iconic dive sites in Thailand and the corals of the Egyptian Red Sea, but with its own unique Zanzibarian twist.

Anyone headed to Zanzibar specifically to dive will already be aware of just how much marine life the island’s dive sites have to offer. Whole days can be spent exploring pristine reefs teeming with tropical fish, and deeper sites crawling with blue spotted rays, huge schools of barracuda and jacks. Zanzibar dive sites are also blessed with the occasional guest appearance from a giant moray or even dolphins.

What makes this an even more special place for scuba diving, is the absolute lack of fellow divers in the area – it is rare to see a single other diving group or even a boat on most of the sites. Zanzibar lays no claims to the title of ‘unspoilt tropical island paradise’; indeed the northern coast of Nungwi has long been an established favourite with the jet-set, but on the more rough-and-ready east coast of Zanibar, it’s a different story.

Here lies magical Bwejuu Beach (voted amongst the top 30 island beaches, by Conde Nast Traveller in its article “The Ultimate Worldwide Island Beach Finder” in 2007) with 12 miles of white sand and the launching point for dives to one of the most remarkable dive sites in Zanzibar.

The Famous Blue Wall Dive Site, Zanzibar: Not for the Faint Hearted

Perhaps the best Zanzibar diving experience awaits those who get invited to dive “The Blue Wall”. Rising Sun Dive Centre, located on Bwejuu Beach offers this as one of its signature dives, but only if you meet the strict criteria:

An Underwater Ride to Rival Any Zanzibar Dive

After a short boat ride out to the dive site, divers descend directly to the reef at 42 m. The visibility is almost always stunning – it’s possible to see the wall from the surface and the descent is magical, dropping past luminescent jellyfish and schools of curious snapper who often come to check out divers. As it levels out, the nitrogen narcosis kicks in and it’s best to just turn into the current and be swept along the wall. Just kick back and enjoy the ride.

And what a ride it is; a coral wall covered in the healthiest corals, small (and large) nudibranchs nestled between them for protection, fish everywhere. There are often sightings of the resident family of clown triggerfish or the giant Napoleon wrasse that like to welcome uncommon divers. Friendly and curious, they often ride along with groups for the entire dive, coming closer to eye off the divers, then circling back and riding the currents to conserve energy.

Giants of the Deep

At certain points, it’s possible to drop to 50 m to eye off-white spotted groupers hiding in caves, and then ascend slightly to ride along the top of the wall sweeping past angelfish, a multitude of butterflyfish and schools of small glassfish clinging to the reef against the pull of the current. It’s not uncommon to see giant marbled rays at least 2 metres in diameter, who don’t seem to notice the presence of divers.

The grace and peacefulness of a ray in flight is something that everyone should experience at least once in their life – it makes for a truly magical moment. Even the compulsory decompression stops at this site aren’t dull, with jacks, fusiliers and snapper passing by and large Jenkins rays circling around on the sandy bottom far below.

For an unforgettable Zanzibar diving experience this little known and even less visited site, should not be missed. Even the most seasoned diver couldn’t fail to be impressed by the condition and quantity of marine life, the clarity of the water and the sense of peace that comes with drifting along the wonderful “Blue Wall”.

But the exact location of this top Zanzibar dive site is a closely guarded secret, known only to a few local dive instructors – and with such places becoming rarer and rarer in the ocean, it’s likely “The Blue Wall” will remain “by invitation only” in the foreseeable future. 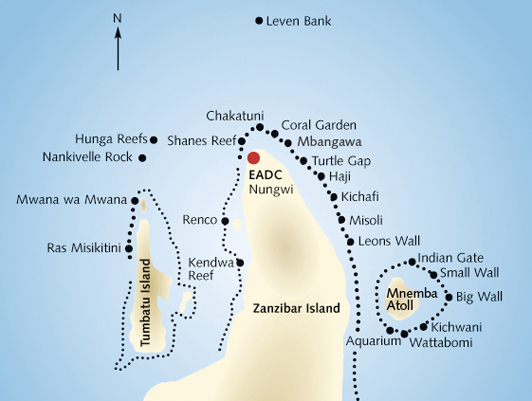 The main diving season in Zanzibar runs from October through April. Diving in Zanzibar is possible all year round, but the conditions are more unpredictable outside these dates.

Swahili. English is spoken in most resorts and dive centres in Zanzibar.

Tanzanian Shillings and US Dollars in some resorts.