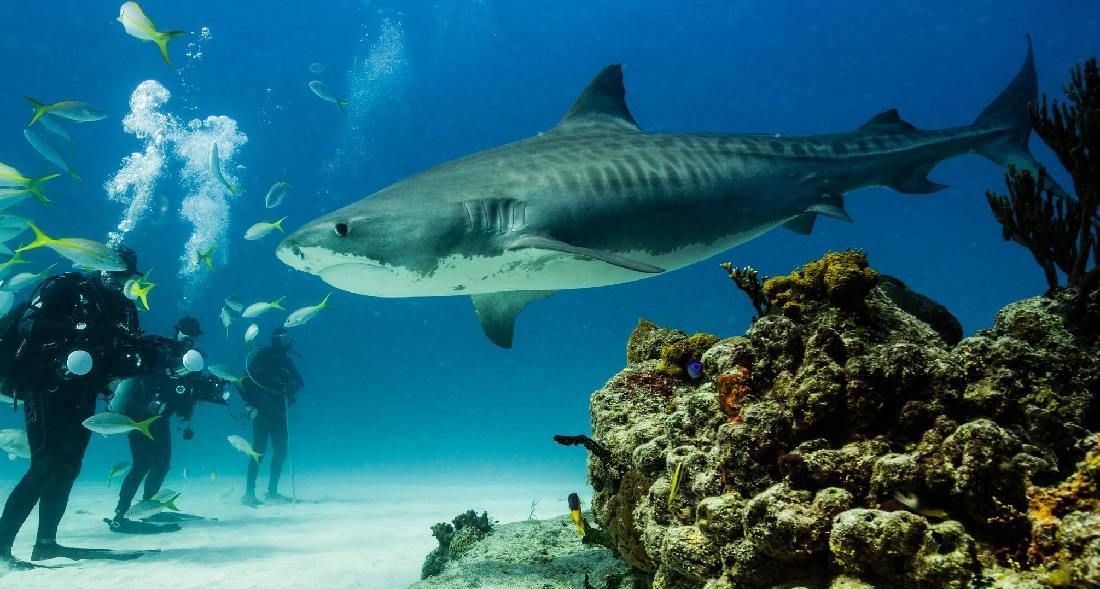 Sharks have withstood quite an undeserved reputation as the loathsome, fierce monsters of the deep blue ever since Hollywood hits like Jaws replaced Moby Dick as the symbol of all that we humans fear about the sea. And certainly achieving a comfort level with sharks is well, as improbable as exchanging Seinfeldian moments with the guards at Buckingham Palace. It’s just not going to happen. So how does one demystify the age-old reputation of the shark?

Encountering sharks underwater, nose to nose, in their own turf, may seem like an incredibly insane pursuit, but it is one that is necessary in order to quench that curiosity and begin to understand and appreciate these big fish and their finely tuned, exotic nature.

To do this, here are some of your options: Close the door and jump in the cage that separates you from the infamous great white in the chilly waters off South Africa or South Australia. Gaze up at the classic silhouette of swirling hammerheads in the waters of the Pacific Ocean. Check out the locals in Thailand and the Caribbean—grays, black and white reef tips, and the gentle giants, whale sharks.

Whether you suit up and take that plunge into a watery bowl of adrenaline-inducing encounters, or sit back and observe them in an aquarium, our ability to be part of the shark’s world allows us to put them in context, as an integral part of the ocean’s great chain of life.

And considering the bad rap sharks have gotten over the years, we owe it to them to deliver our apologies in person. 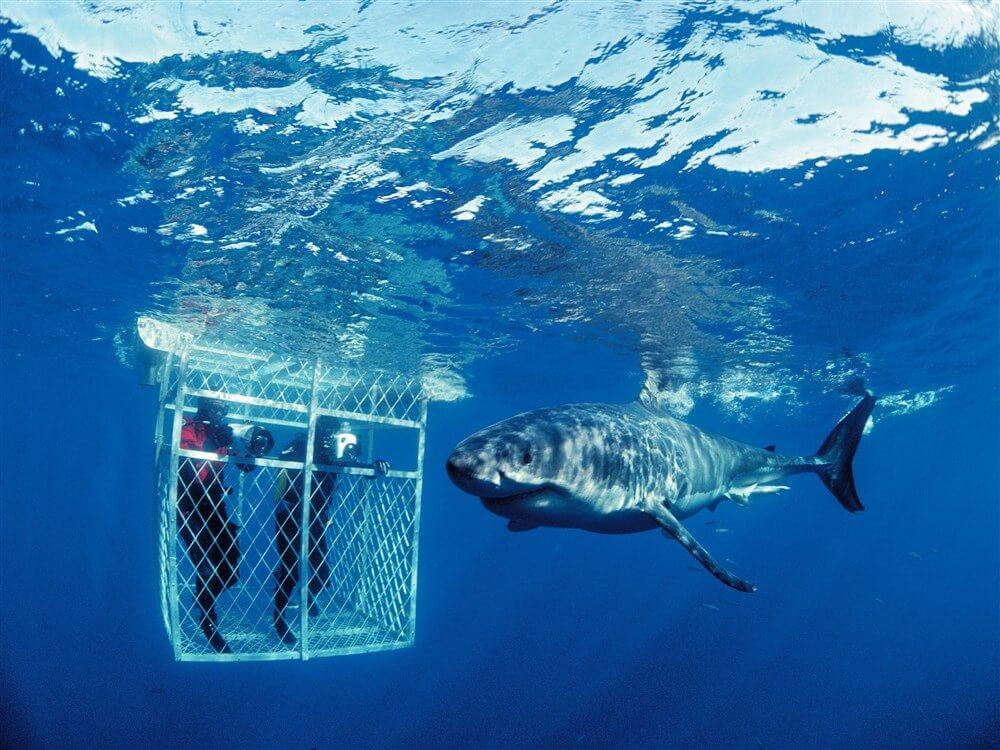 A glimpse of a great white shark while taking a dip in the ocean is what nightmares are truly made of. Just imagining those coal-black eyes transfixed on you, their next source of carbs, is enough to bring you into an inescapable zone of fear. For most sane humans, it is the last thing they ever want to see when romping the reefs and waves. But many have been changing their minds lately and heading to Gansbaai, South Africa, for what is, perhaps, the Everest of underwater adrenaline rushes.

After cruising in a boat for about 45 minutes you reach Shark Alley, aka “Fast Food Alley.” The surrounding islands, mainly Dyer Island and Geyser Rock, are covered with seals and jackass penguins and form a barrier between the open ocean and the bay where sharks love to roam for their meals. And why not, it’s easier than a drive-thru at McDonald’s.

By jumping into a cage you can observe the feeding activity firsthand. And don’t worry about not getting your money’s worth-shark sightings are practically guaranteed. One popular dive outfitter boasts a 99.9 percent chance of it.

Where else but in South Africa can you get jaws AND paws all in the same day? 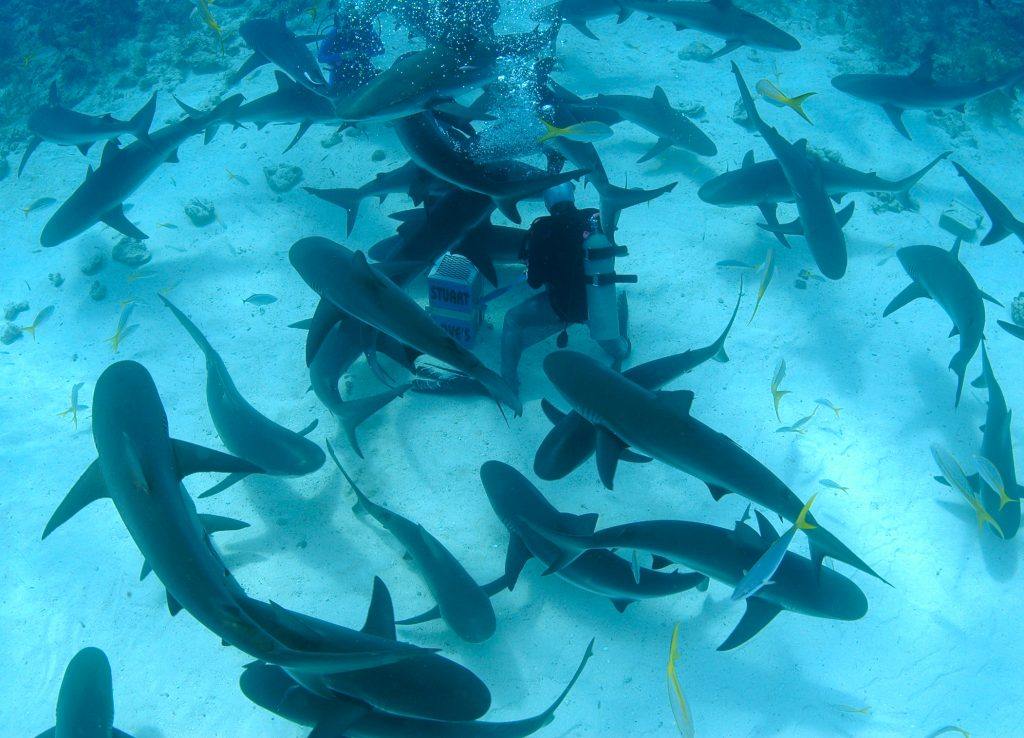 They say it is therapeutic to come face-to-face with fear. If that’s the case, then diving cageless with reef sharks circling all around you is, perhaps, the most powerful dose of Prozac. Nassau attracts thousands of tourists every year who come to enjoy the corals and beautiful fish—but the desire to see something “big” has been increasingly on the rise. To satisfy shark seekers, many dive operations now guide curious travelers to prime locations where they can view gatherings of white or black reef tip sharks, from the comfort of the ocean floor.

The divemaster dons chain mail before entering the water with bait to lure the hungry predators. That’s all it takes for the swarm to begin, while the audience below observes the feeding frenzy overhead. Luckily, all the focus is on the bait; the observers beneath them go unnoticed.

As with any tourist destination, the price can be quite hefty here. But the visibility of the Caribbean, and the unpredictability of the visitors you might encounter—anything from small reef sharks to the grand poo-bah of them all, the great white—it is no wonder that the Bahamas is pitched as the number one shark diving resort in the world.

Pull-on that thick wetsuit and jump overboard into the frigid waters off Rhode Island—Point Judith to be exact, about three hours offshore along the pelagic-rich edge of New England’s continental shelf. 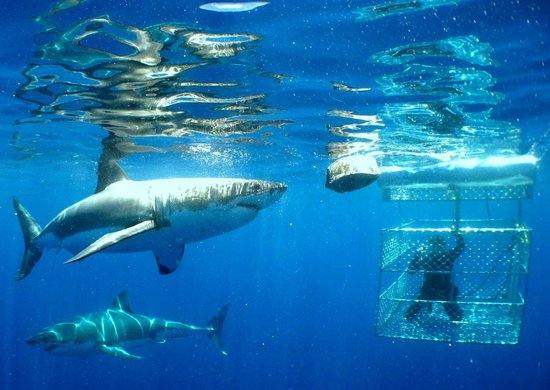 This might seem like an unlikely spot for a dive, but it’s here that the highly migratory blue sharks linger. The species prefers temperate waters, so the bone-chilling 55 to 64-degree temps make these depths a perfect pit stop before shifting southward to Cape Hatteras and as far away as Venezuela and Africa. These fascinating sharks hold the long-distance record—they have been known to journey nearly 4,000 miles during the migratory season.

Most shark observation is done from the cage here, but some of the more fearless opt to go cage-free. The ocean floor is about 200 feet down, but divers rarely go more than 10 feet below the surface.

Once the waters are chummed up you will find yourself surrounded by a dozen or so blue sharks, their pointed snouts and slender bodies quite distinguishable. You generally get two 30-minute turns in the cage, and you often have to swim a significant gap between the cage and the boat unprotected.

For a country so small (.03% of the Earth’s surface, to be more precise), Costa Rica hosts an amazing amount of the world’s biodiversity (roughly 5%). More than 500,000 species are found here, from barely visible to the eye insects to larger than life predators.

This rich natural world doesn’t stop on land; the surrounding waters are just as ripe with life, with about 1,000 marine species. And reigning over all of them are, of course, the sharks.

White tips, hammerheads, bull, and whale sharks are the most frequently spotted in these parts. But it’s the hammerheads that offer the most intense diving experience. These surreal-looking creatures swarm the waters off Cocos Island, a few hours’ boat ride from the mainland. It’s possible to see so many at once you might begin to wonder what they did with the rest of the fish.

The island is uninhabited, so all diving is live-aboard. However, most outfitters offer the opportunity to spend some time on land. And it’s worth checking out—the pristine island contains some incredible flora and fauna in its dense tropical rainforest.

Galapagos is world central for weird and plentiful wildlife. And that goes for what’s under the water as well as what’s hanging out on the dry part of these volcanic islands. And when it comes to sharks, you’re in for a special treat.

Liveaboards are the way to go—the best shark viewing is off Wolf and Darwin Islands, a good boat ride from the Galapagos’ main islands. Throngs of shark species roam these waters; silky, white tip, scalloped hammerheads, and whale sharks give divers quite an evolutionary show.

Hammerheads are, perhaps, the ultimate experience. Immense schools of them circle underwater peaks, possibly drawn by electromagnetic patterns. This is not an experience of one or two big sharks—it’s an experience of sharks as far as the eye can see.

Bet you didn’t know that the largest number of unwanted shark encounters in the world happen in North America—particularly the Sunshine State. Although overfishing of sharks has been a big concern in Florida, tighter restrictions make divers hopeful that the East Coast sharks will be protected enough to allow people to enjoy them—alive. And a few key places where you can dive, swim, or observe sharks is Tenneco Towers, just north of the Dade/Broward county line.

Big bull sharks will be your host at this deep dive site. Despite their being skittish of your bubbles, the encounter will feel like a true adrenaline-inducing run with the bulls! Get your fill of Chanel and sharks at Palm Beach, an increasingly popular place to spot hammerheads, bulls, tigers, whale sharks, and Caribbean reef sharks. There are plenty of diving outfits that can suit you up and help you get “chummy” with these Florida residents! 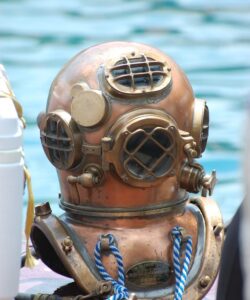 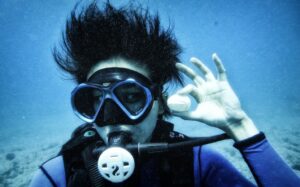 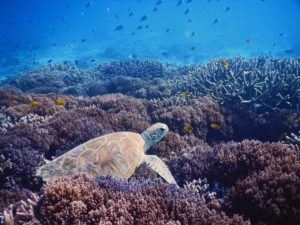 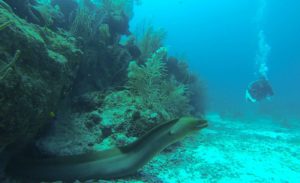 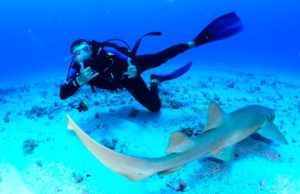 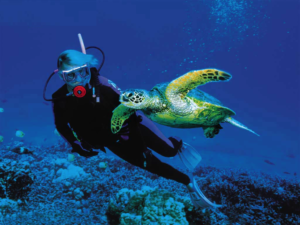 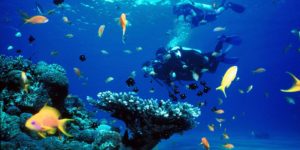