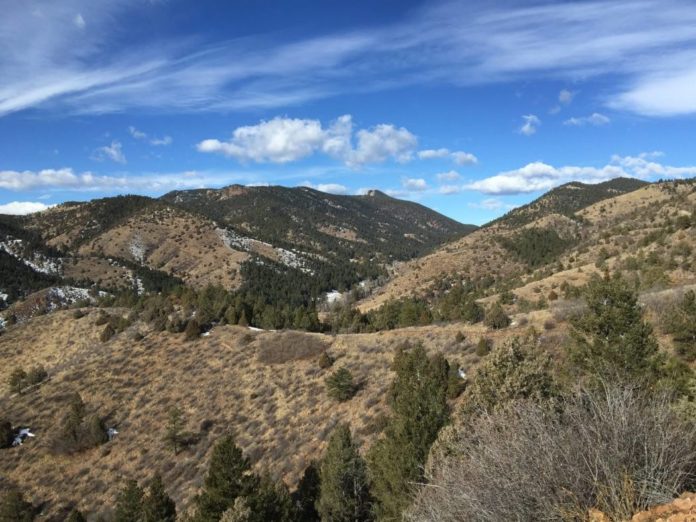 For the last few years, the Rim Rock Trail on the top of the mesa has been an out-and-back trail that led hikers to the top of the mesa on the north side. The park’s map had a box over the loop portion of the trail that said the area was closed year-round for a “sensitive area closure.” However, that apparently has changed.

To get to the Rim Rock Trail, hikers start at the North Table Mountain trailhead on Highway 93 (directions below). Hikers begin by hiking up a wide and steep gravel road. Expect about 450 feet of elevation gain in the first .65 miles. This ascent can be tough, but after that, the hike gets much easier.

The Rim Rock Trail heads northeast across the mesa. The trail has some minors ups and downs as it heads to the north rim. Along the north rim, you’ll have great views of the foothills and the Flatirons. You may even spot large mounds of rock. That’s evidence of when lava flows formed North Table Mountain about 60 million years.

As you hike, look for deer, ducks, and raptors. There are 80 to 100 mule deer who live on the mesa top. The ducks and other shorebirds enjoy three seasonal ponds on the mesa top. (Note, I’ve only spotted two of the ponds due to our dry weather over the past few years.) The raptors that live here are golden eagles and red-tailed hawks. Because those raptors like to nest in the cliffs, the Rim Rock Trail is closed from March 15 to July 31.

Details: The hike I described, from the trailhead, up the hill, along with the Tilting Mesa Trail to the Mesa Top Trail to Rim Rock and back is 6 miles with about 900 feet of elevation gain with all the ups and downs. You can easily add more miles by exploring more of the trails.

Directions: The trailhead is north of Golden on State Highway 93, just north of Pine Ridge Road.