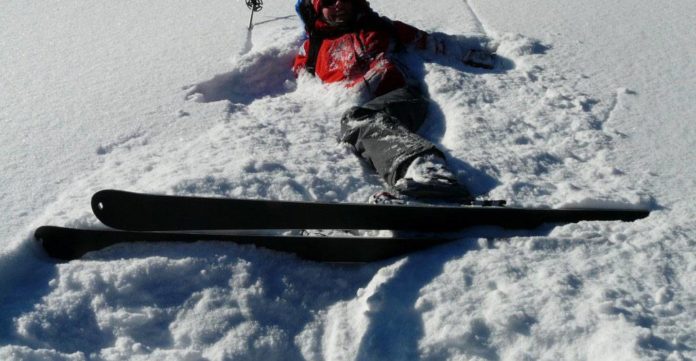 The most inevitable thing about a new skier’s first day is that falling and getting up will be part of the process. Here’s how to manage this fundamental skiing skill.

It doesn’t look easy, and it isn’t. Downhill skiing requires balance, muscle, skill, finesse, and a bit of nerve. But perhaps most importantly, it requires learning how to fall without fear and how to get up again.

Don’t wait until gravity attacks on a slope! Instead, pick a nice gently sloping spot, and sit down in the snow.

Learning How to Fall

In real life, skiers fall every which way: backwards, forwards, and sideways, and will thus end up in the snow lying in various positions. Adult skiers are more terrified of falls than they need to be. Bindings for adults are generally set to come lose if there is any torque from the skier to the ski. This releases the feet from the skis, and helps prevent broken bones. Also, snow, while not exactly a soft landing, is fairly forgiving to fall on, although it’s probably best for beginners to stay away from the outer edges of slopes, particularly where there are trees.

The best strategy for an adult who has completely lost balance is to simply relax (yes, easier said than done) into rag-doll mode. Beginners won’t be going that fast, and it’s sometimes possible to simply sit down.

Learning to Get Up From a Fall on Skis

Whatever the landing position, the goal is the same: The skier needs to wiggle around until he is sitting in the snow. If there is any sort of slope, the skis should be perpendicular to the slope, and skis, limbs, and body should be arranged so that the skier’s body is upslope of the skis.

The upslope edges of both skies skis should be dug into the slope. Poles should be placed on both sides of the skier’s body – one pole above the skier, the other below the skis. The skier then tries to slide his feet directly underneath his crouched body, and using the poles and the dug-in edges of the skis, pulls and pushes himself into a standing position.

It’s immediately obvious that the difficulty of getting up is compounded by the fact that the skis are locked into the bindings. This is something skiers get used to with time, not to mention and lots of falls. But the stiffness of the boots actually helps, because it gives the skier something to push against.

Each fall is different, and getting up can sometimes be tricky. Don’t panic! Remember that there is always the lazy skier’s option: Release the bindings, step free of the ski, stand up, put the skis on, and continue downhill as though nothing ever happened..