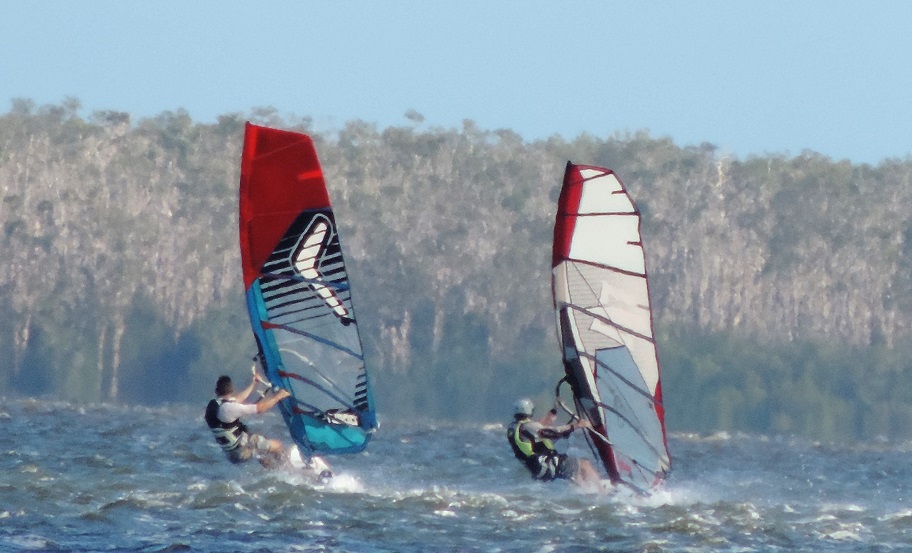 Lake Cootharaba, or “The Lake” as it is known in windsurfer circles, is five kilometres long by about three wide.

Lake Cootharaba is Perfect for the Windsurfing Beginner

In the early 1900s trees along the shores areas were logged. This depletion of the natural vegetation led to the gradual build-up of sand, making the lake shallow. This makes it perfect for windsurfers as most of the lake is only one to two metres deep.

For windsurfing beginners it is simply a matter of walking back if getting tired or fed up with the sailboard. For advanced sailors it offers good, long slalom runs; perfect for practicing new techniques. A standing start to get going – even a kilometre offshore!

The Wind On Lake Cootharaba

A strange quirk of nature means the area gets plenty of wind. Some say the Venturi effect of the surrounding hills funnel wind over the lake. Another theory is that heat rising from a large expanse of shallow water generates the wind.

The blow on Lake Cootharaba usually starts around midday, rising to 15 to 20 knots during the afternoon. It is a rare weekend the short board doesn’t get wet.

As the lake is so shallow the wind blown chop stands up straight, perfect for chop-jumping.

Camping At the Lake

The small town of Boreen Point sits on the western side of the lake.

The best way to experience Lake Cootharaba and its beauty is to camp. Campgrounds at Boreen Point and nearby Elanda Point have good amenities and charge a small fee.

It is possible to pitch a tent on the edge of the lake and wake to a spectacular view. In the early morning the lake can be like a sheet of glass.

Other benefits of camping at Lake Cootharaba are kangaroos hopping through the campsite and tame possums feeding at night.

Touring and Cruising on a Windsurfer

The size of the lake makes it great for touring and cruising on a windsurfing longboard.

One good run is from Boreen Point north to Kinaba where a tourist information centre caters for the neighbouring Cooloola National Park. This unique building sits on stilts on the edge of the lake and is staffed by a park ranger. The only access is by water or a walking track.

Kinaba mainly caters for tourists coming up from Noosa in commercially operated boats, but the ranger doesn’t mind a sailboarder stopping for a look around.

Depending on the wind direction and strength it can be a challenge to sail to Kinaba and back to Boreen Point. Especially if the wind changes direction halfway across!

Another good cruise on a sailboard is across Lake Cootharaba to Teewah landing. This is directly opposite Boreen Point on the eastern side of Lake Cootharaba. The landing is one of the old logging company’s jetties. A track winds from the landing over two kilometres of sandhills to the Pacific Ocean.

Crabs and small stingrays are the only life that could be considered dangerous in Lake Cootharaba. Sailors may get the occasional nibble on the toes or stand on something slippery. This usually causes a wild panic to get back on the sailboard.

No matter what style of flat-water windsurfing, Lake Cootharaba has it.

Perfect for windsurfing beginners, for fast slalom boards and cruising on a sailboard. All this combined with the charm and character of a small sleepy town and the thrill of ‘roughing it’ make Lake Cootharaba stand out as one of “the” windsurfing spots in South East Queensland. 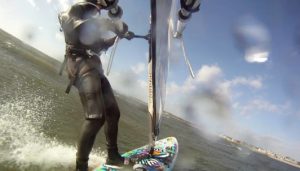 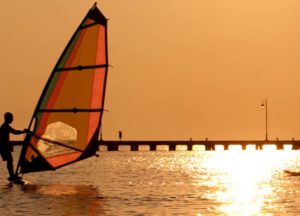 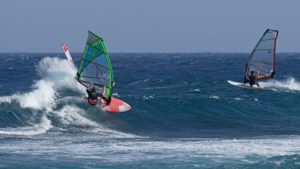 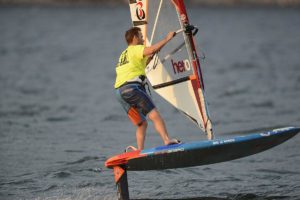 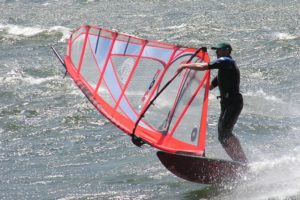 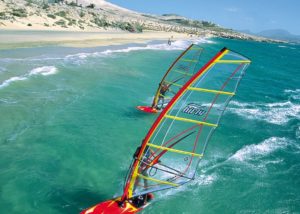 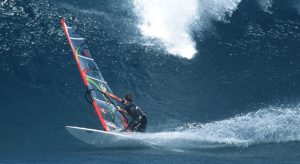