What to Expect When Skydiving for the First Time 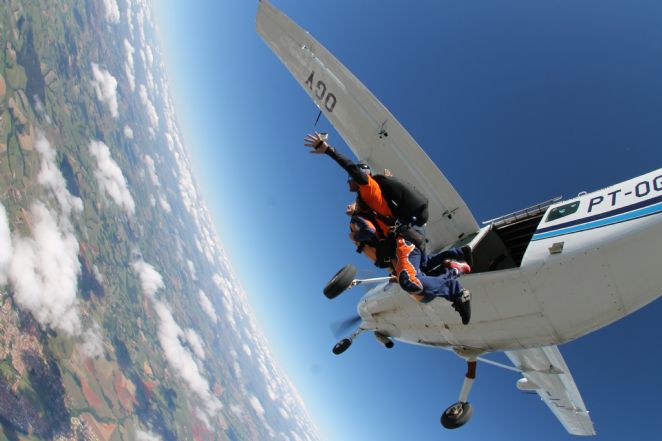 A Step by Step Introduction to Tandem Jumping

The adventure movie entitled The Bucket List, which starred Jack Nicholson and Morgan Freeman, led many people to create their own list of things they wanted to do before they “kicked the bucket.” Because the film’s leading characters included skydiving in their list, it influenced people to consider this choice for their own checklist.

From Considering Skydiving to Getting on the Airplane

When considering skydiving, the first prerequisite is finding an airport that offers it. Usually smaller, more rural airports are the best bet. When making an appointment, the company will ask a series of questions relating to weight, for which there is a limit; age, which varies by particular skydiving companies; and physical health. Persons with handicapped conditions can be accommodated but pregnancy and heart conditions advise caution.

Once the date for the jump is set, a list of pre-flight instructions is given. These include wearing close-toed shoes, and arriving at the airport in advance to complete paperwork. Then all that remains is being receptive to an adventure.

Arriving at the airfield, there will be several training steps to follow. An informative video depicts the dangers and thrills of skydiving. Pages of paperwork need to be signed relinquishing the company’s responsibility in case of death, dismemberment or any tragedy. It could be best to just realize this is a dangerous undertaking and sign away.

A decision needs to be made regarding having a photographer accompany the jumper to record the event for posterity. It is well worth the extra cost, especially given all the anticipation. When the jump is completed, the photos are immediately available for viewing and can be taken home as still photos, a CD with a complete series, or a video.

Next the instructor who will be jumping in tandem with the first-timer will verbally instruct the person in how to react. These instructions will be heard but not necessarily comprehended due to nervousness, fear, or outright panic. Then it is time to don the flight suit and harness and follow the instructor to the plane.

From Airplane to Free falling

The small propeller plane holds a few jumpers, the instructors, and the pilot. Before take-off, the instructor securely fastens the connecting harness to the jumper as only the instructor is wearing a parachute, along with a back-up chute. As the plane taxis, starts down the runway, and begins to climb, the churning in the stomach becomes more noticeable. Gallows humor comes into play with babbling comments. Watching the ground get further and further way leads to the question, “Why jump out of a perfectly good airplane?” When finally reaching the 13,500 feet altitude, the first pair slides over to the open door, holds the grab bar and lets go.

Many forces impact that moment: the rotating propellers seem very close, the wind that hits full force is staggering and every pore on the face seems to tug backwards toward the skull, and after an initial gasp, breathing seems impossible. It takes supreme effort to open one’s eyes to see what’s happening.

But once the instructions given on the ground are recalled, and relaxation takes place, the joy of freefalling is fantastic. For about 8,000 feet it is possible to float like a bird and enjoy the incredible view. With the instructor guiding, flying maneuvers are possible – unless fear has stayed with the jumper and it is impossible to forget this is freefall.

From Open Parachute to the Ground

The parachute opens at about 5,000 feet at the instructor’s pulling of the ripcord. The abrupt jerk when it opens in both a feeling of relief at being secure and a disappointment in leaving the serenity of freefall. It is possible to swing or swivel while the instructor maneuvers the open chute but this also can cause queasiness in the vulnerable.

During the final hundreds of feet, the ground seems to be rapidly rushing up but with the instructor’s assistance, a gradual landing is possible. Some tandem teams are able to land on their feet and run to a stop. Others bounce in on the seat of their pants before ending the drop. All too soon it is back on terra firma with the memories of a bucket list adventure completed. This is when the photos become invaluable and give credence to having actually jumped from a “perfectly good airplane.” 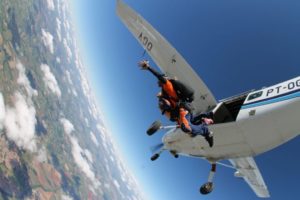 If Skydiving is on Your Bucket List, Make the Jump 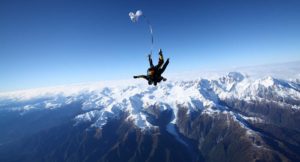