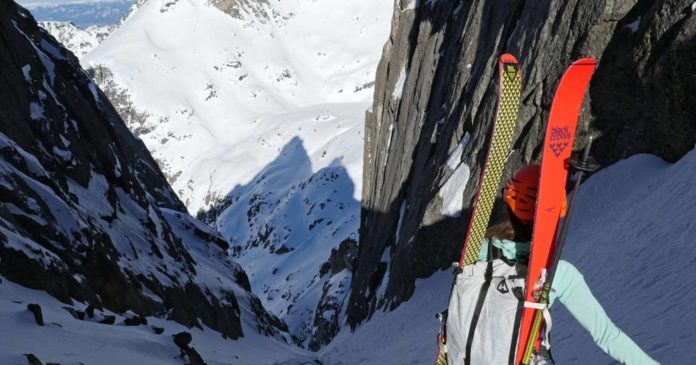 Ski-touring boots, bindings and skis differ from downhill ski equipment. This article highlights important things a novice should know before renting or buying.

Different conditions require different gear. So it’s no surprise that downhill skiing and ski-touring (or cross-country in the USA – not to be confused with European cross-country or ski-laufen, which are more akin to flat piste skiing) have different ideal set-ups of boots, bindings, skis and ski accessories (such as skins and harscheisen, which downhill skiers may never have heard of). This article highlights the important differences that a novice should know before renting or buying the first set of ski-touring gear.

Ski-touring boots look much more like downhill boots than Nordic boots. Deceptively so, and it is very easy in the hire shop not to notice the differences. Key differences include

The obvious thing the novice should check here is the radius of the baskets. Normal downhill baskets are usually little more than 2cm radius. Ski-touring baskets are larger, often 3-5 cm in radius. Only a small increase in size, but it can make all the difference in soft deep snow. Wider baskets spread the load much better, and the pole is less likely to punch through the snow unexpectedly. This can make a big difference when trying to get up after another face-plant (or other fall) in soft deep snow.

These are probably the most obviously different item of kit to their downhill cousins, though at first glance they can also appear deceptively similar. However, they have an additional ability to release the heel and a number of uphill riser settings for different gradients of uphill slope. Ensure that the ski poles given are sturdy enough to operate the settings without breaking the tips! This article by the same author has further information on ski-touring bindings.

Ski-touring Skis, Skins and Other Accessories

These days hired touring skis tend to be just downhill carving skis fitted with touring bindings. They should be relatively light, and with a fairly pronounced curve from fat ends to thinnish middles to aid turning. Lengthwise the same rule of thumb applies as to downhill skis – standing on end to about eyebrow height is usual. Ensure that the skins provided (essential for uphill travel) are the correct length and fitting for the skis provided. Harscheisen are the equivalent of crampons for skis. These should not be used on rocks or water-ice as they are softer than walking or climbing crampons, but on steep hard-snow terrain they can provide invaluable grip where skins do not provide sufficient grip. An ice axe should ideally be used in conjunction with these (as when walking with crampons) instead of one pole.

Key differences between ski-touring and downhill gear allow for softer deeper snow (often where the lead skier has to break trail over undulating ground), the need to go uphill – often on steep slopes and occasionally carrying skis rather than using them, and the wilder environment encountered by ski-tourers. Avalanche gear is also essential for ski-tourers and may not be immediately obvious to those who have only been on-piste, this article gives more information.