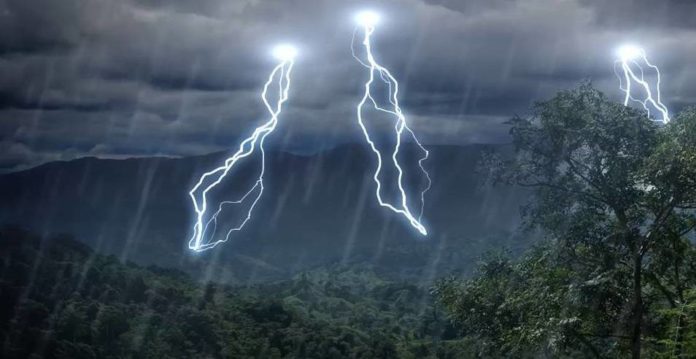 Lightning season is starting, and it helps to be reminded of how to stay safe from strikes. Here is a quick primer of lightning safety tips.

Lightning Safety is something that we all need to be reminded of, each season, specially the campers and hikers out there. The best hiking is the safe hiking.

Lightning is an electrical discharge, a giant spark of electricity, from mature storm clouds that can strike with deadly force.

Lightning kills about 100 people every year in the USA, mainly in Florida, which has more thunderstorms than any other part of the country.

A crisp bolt of lightning can easily display its intensity, but the thick clouds of a thunderstorm, with embedded heavy rain squalls, often mask lightning’s danger.

Scientists estimate that at any given moment about 2,000 thunderstorms are producing lightning around the earth. These storms shoot an estimated 100 bolts and other discharges of electricity known collectively as lightning.

The average lightning stroke has a peak electrical current of 30,000 amps. Extreme lightning discharges can reach 10 times that, while some discharges, especially those within a cloud, are only a few thousand amps. In terms more people are familiar with, the electricity flowing within a lightning bolt can reach 200 million volts. Combined with the high amperage, lightning has enough energy to kill instantly.

Ball lightning seems to be the one exception. Extremely rare, there are few pictures of ball lightning, which is usually described as a floating sphere, often about the size of a basketball. Numerous sightings of ball lightning have been reported since the earliest days of written records.

Ball lightning is not known to have ever killed or injured anyone, but has caused minor damage. The origins of ball lightning continue to elude scientists.

Lightning evokes more fear in me than anything else in the backcountry. It is amazing how quick those storms appear, especially if they are hidden by a ridge. I had one come over a set of peaks like a dragon, when I was a good half mile above timberline. Me and my dogs ran down along the side of the ridge to treeline. I stayed off the ridge summit because I figured that would be the most likely spot for a lightning strike.

I have sat through some horrendous storms in the mountains, and I am awed by the power and intensity of lightning and thunder. It is particularly impressive to be up there on a dark night, then have a lightning strike brighten the entire mountain range in pulsating ebbs of light. It also is something to be lying in your tent, and feel the entire mountain beneath you vibrate with the thunder.

There is no doubt that wilderness travel can be risky. You just have to use your head and minimize the risk, and realize that danger is part of an active life. To have a rich life, you accept the danger with a level head and a calm disposition, knowing you are up there seeing things that most people never will in a lifetime.

It’s important to remember that there are risks from all lifestyles, and that none of us survive. A person addicted to sitting on a couch in front of the TV can face health issues from too much comfort and inactivity – obesity and high blood pressure and heart disease are a few.

The native Americans have a legend that says the storytelling season ends with the first thunder in springtime.

Our first thunder here in Colorado came about three weeks ago, and I am ready to get out and do more living and less talking. Before long I will be shouldering a pack and climbing high to witness the beauty and mystery of the mountains. Up there me and my border collies are about the three happiest creatures on this earth.