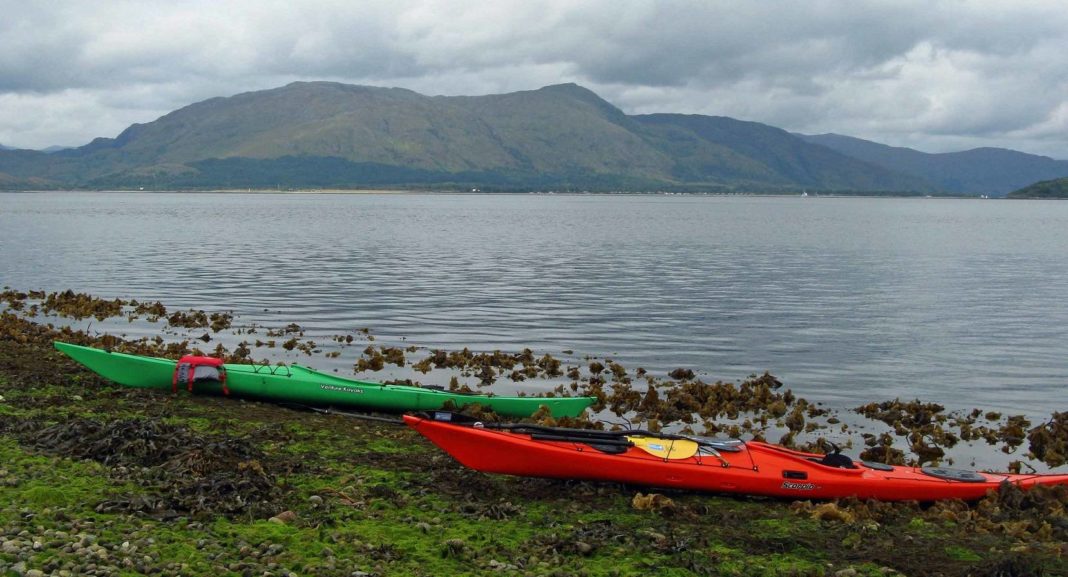 Much of west coast Scotland that reminds one of craggy places like Norway and Newfoundland. In Scotland earth fractures during the period of early continental shift have filled with fresh water creating immense lakes like Loch Lomond. Along the shore, the same phenomenon caused glacially eroded mountains to drop into the sea, forming long fjiord-like arms that jut far inland.

Loch Linnhe is one of these lines where the earth split and formed an arm of the sea running far inland. Beginning at the Firth of Lorn, which separates the Isle of Mull from the mainland, the line of Loch Linne runs northeast in a straight line and lying on that line are Loch Lochy, Loch Ness, Inverness and Moray Firth on the Northeast coast. Some even claim that Nessy, the Loch Ness “Monster” swims to the sea at Loch Linnhe through underground passages.

An Urge to Kayak Loch Linne

The lure of the Loch became so great that we contacted Wilderness Scotland, whose headquarters are in Cairngorm National Park, but who arrange hiking, boating and kayaking guided and unguided adventures all over Scotland, including the Outer Hebrides.

Wilderness Scotland was glad to arrange for our guide and the equipment to meet with us at the Isle of Eriska Hotel. Sure enough, at the hour appointed an SUV with a trailer and three kayaks appeared. Over a cup of coffee our guide, Australian born but Scottish to the core, went over the plan for the trip. Because of tides and other concerns, he suggested that we travel up the Loch a bit before putting in. The plan was to travel up the east side of the Loch for a few miles and put in above Stalker Castle. 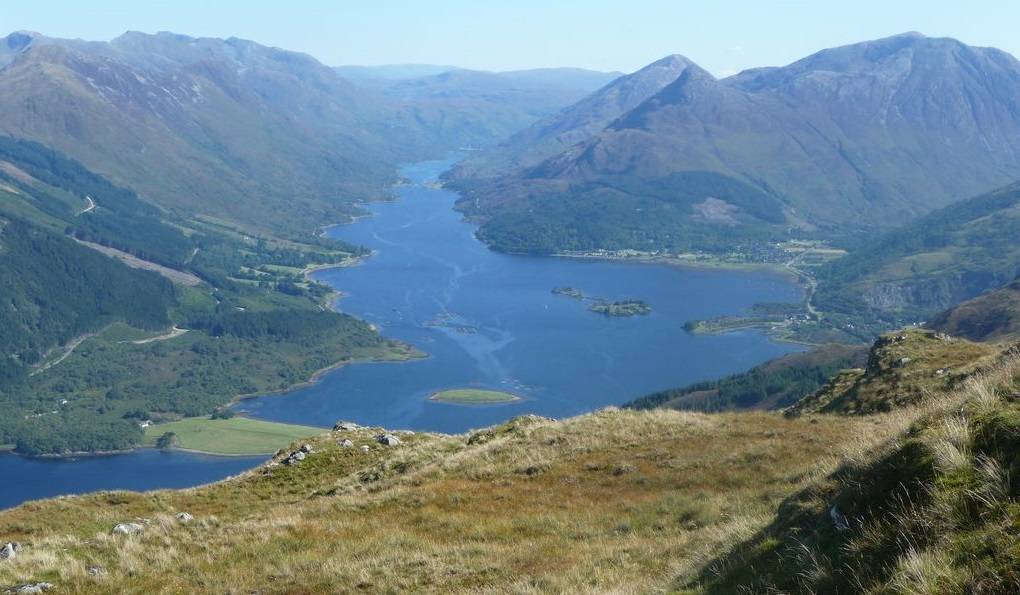 We had to stop at the Stalker castle café to take a look at the castle, a straight walled three story fortified stone house perched on a island just offshore. Built by the Lord of Lorn in the 15th century, it has been restored but is not generally open to the public. The bright and modern Café is a great stop for breakfast or lunch.

A few miles up Route A 83, A 828, a pull-off on the shore marks the place to off load the kayaks and begin the exploration of Loch Linnhe. A short climb downhill led to a rocky shore but one with a good put-in. Although we offered, our guide did the tough work leaving us to carry only our life vests to the water’s edge. What followed next was one of the most thorough and understandable instruction periods. Short and concise, our guide reviewed launch and paddling techniques and emergency procedures, including the off-chance of capsize. Although we are seasoned kayakers, we always let guides do their instruction period and this was one of the best. 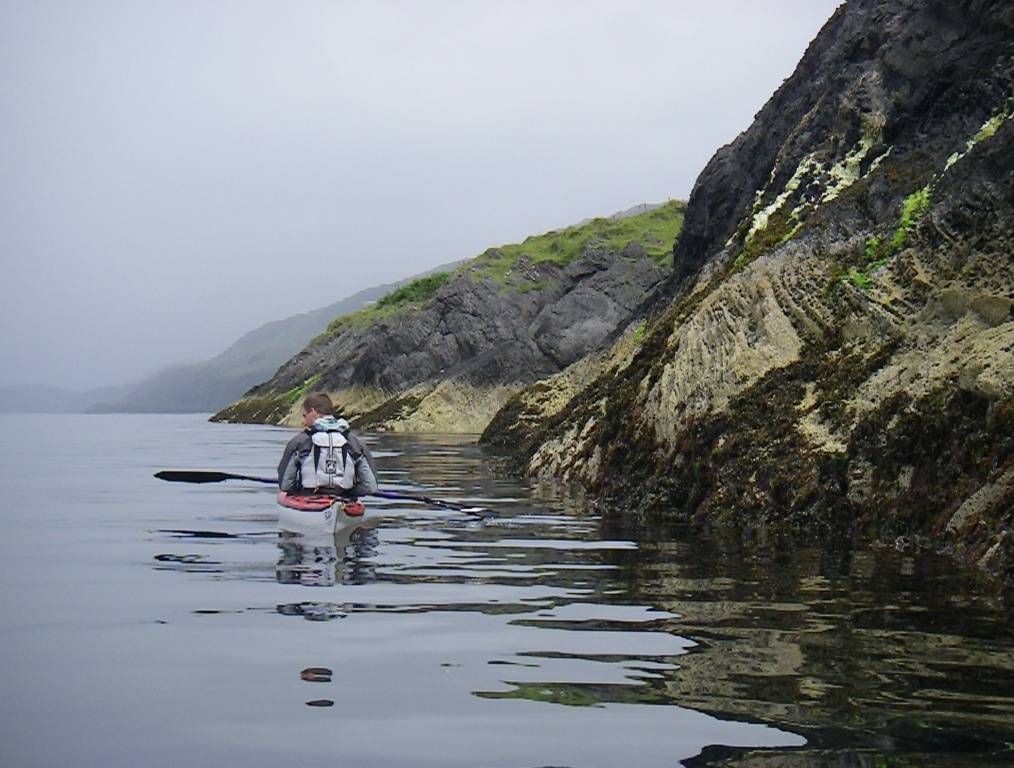 Exloring the waters and Nature of a Scottish Loch

We put in opposite the north end of Shuna Island, paddling northwest across this arm of the Loch and rounding the tip of the island, staying close to the shore. This is a farmed island, with mostly grasses and low growth and patches of tall trees. A farm on the south end is the only habitation. Hugging the shore brought us plenty of attention from gulls nesting along the shore. Although the adults were flying close above our heads, we could still see large puffs of grey feathers hopping from shelter to shelter on the shoreline.

With the full breadth of the Loch to our right we headed off to a group of small skerries in the middle and found more active birdlife there. The plan had been for lunch there but the birds were not welcoming and we headed further south into a small bay on the north end of Lismore Island. A small gravel beach provided a good landing spot and we soon located a high spot with wonderful views. The gulls fortunately gave us a break and our guide broke out the special lunch of sandwiches and juice and we celebrated our paddle with good conversation while watching a fishing trawler plying the waters.

The paddle in this broad Loch is simply breathtaking. With the islands of Shuna and Lismore to our left and fore, across the loch runs the entire range of the Kingairloch Mountains, the tallest approaching 2,500 feet in altitude, all rising sharply from the sea. Further south, just visible from Lismore island, the Sound of Mull and the island of Mull opposite the southern tip of Lismore.

Rounding Out With Castles

As we paddled around the small islets at the northern tip of Lismore small fishing boats plied the waters in the center of the Loch and a variety of sea birds circled overhead. Headed back to our put-in we came upon another small farmed island with a large area of stone ruins, most probably another castle from Scotland’s turbulent period. A small farm on the north end marks the only human habitation. Under the bright and glorious sun we paddled across the eastern arm of the Loch past castle Stalker and on up the passage between Shuna island and the mainland, passing an attractive marina on the way. The eight mile paddle was not only a chance to get a bit of exercise and fresh air for our travel wearied bodies but a refresher for the soul as well.