The Adventurerr
Home Windsurfing How To Carve Gybe On A Windsurfer 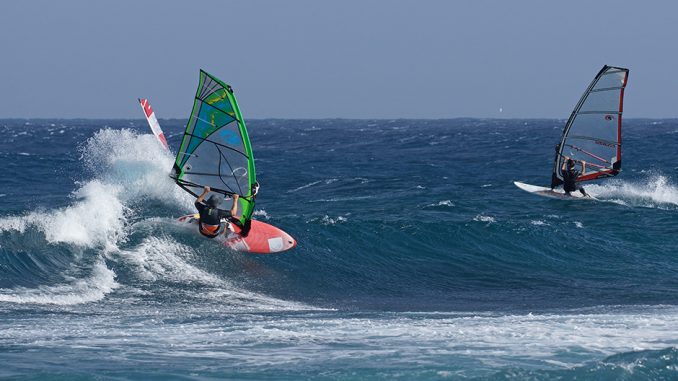 The fastest and most efficient way to turn a windsurfing short board is the carve gybe. This is where the sailboard stays on the plane through the entire turn.

The windsurfing carve gybe gets its name from the action of the board through the water. It should carve in a tight arc, riding the rail which slices into the water forcing the board around like a train on a track. The board move as fast as if still on a broad reach. When properly mastered, the board should actually speed up during the turn.

Difference Between A Carve And Flair Gybe

The sailboard carve gybe is commonly mistaken for a flair gybe in that it looks similar, with the sail being flipped around the front of the board. But in the carve gybe the board must stay on the plane all the way through the turn. The flair gybe is mainly a long board technique where the board comes off the plane and weight on the back helps to spin the board around.

Once a carve gybe is mastered for the first time, the difference between the two is immediately apparent. It is fast, exhilarating and satisfying.

The carve gybe should start with as much speed as possible. The front foot remains in the front strap while the back foot comes out of the strap and is positioned on the leeward side slightly behind the front foot. The leeward rail is dug in, the sail moved forward and the board rips into the turn. The turn shouldn’t be too tight as the board will stall and come off the plane.

When just past the point when running directly downwind, and the board is carving through the turn, the back hand is released and the sail should flip around the front of the board. The free hand reaches around and grabs the opposite side of the boom, the other hand lets go, then grabs the back of the boom. Finally power out of the turn.

The sail should turn with the mast directly in front of the face and the mast should remain at right angles to the board. It shouldn’t fall away to leeward as if doing a flair gybe. The movement of the hands should be like turning the steering wheel of a car: one hand after the other. This movement should be as quick as possible.

To help keep the board on the plane, the body weight should be as far forward as possible and low. With the mast so close and not falling away, the sailor should almost duck under the mast; but don’t confuse this manoeuvre with the sailboard Duck Gybe.

The last movement is to reposition the feet. They should be in the same spot through the turn, the original front foot should finish still in the strap and on the leeward side. This will take some fancy contortions, especially at the end with legs crossed sailing in the opposite direction. After practice, it is possible to reposition the feet during the turn, but it is best to master the basics first.

The main points to remember are to enter the turn as fast as possible; keep the weight forward and as low as possible; flip the sail when just past the downwind point and keep the mast perpendicular to the board and in front of the face.

A well executed windsurfing carve gybe is a great thrill: tearing into a turn at full speed, a quick flip of the sail and pull away without losing one knot of speed; leaving a wake in a perfect semi-circle.