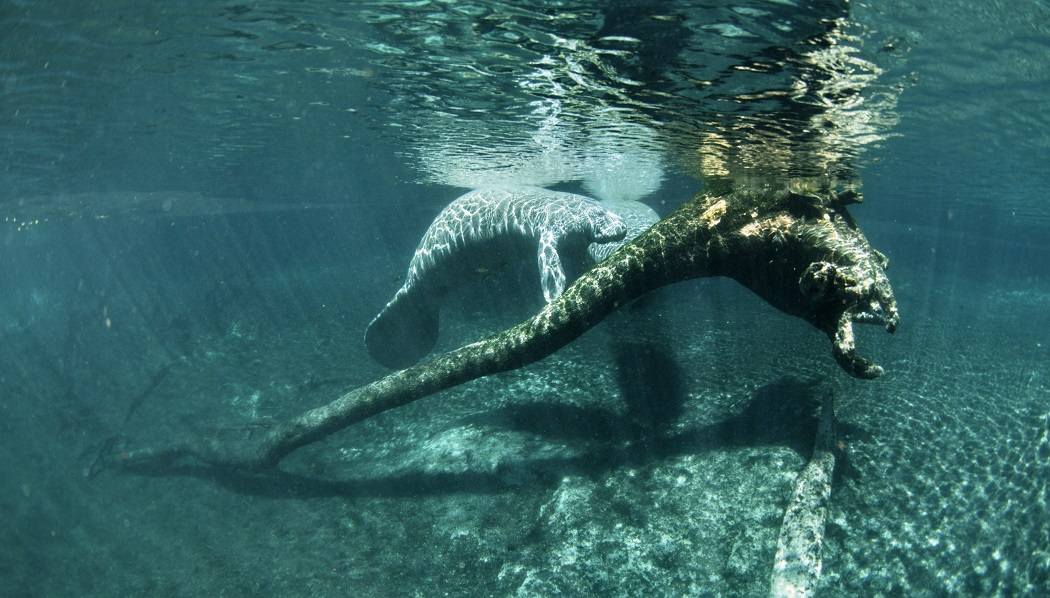 How do you safeguard hundreds of endangered manatees when hundreds of thousands of sightseers want to see them? Ask the refuge staff at Crystal River and they will tell you that it takes fair but firm enforcement.

At the Crystal River National Wildlife Refuge, a refuge established to protect West Indian manatees, the refuge staff’s duties are anything but traditional. They must watch over the Crystal River National Wildlife Refuge and four other national wildlife refuges on Florida’s Gulf Coast, all accessible only by boat. But the fourth most populous state of Florida also has one of the highest numbers of motor boats and the refuge manager is responsible for several seasonal wildlife sanctuaries whose existence depend on undisturbed conditions.

The Crystal River NWR consists of nine small islands totaling little more than 40 acres, but their location in Kings Bay is critical. The headwaters of Crystal River, Kings Bay is fed by a number of freshwater springs that produce 600 million gallons daily at a consistent 72 ºF year round. 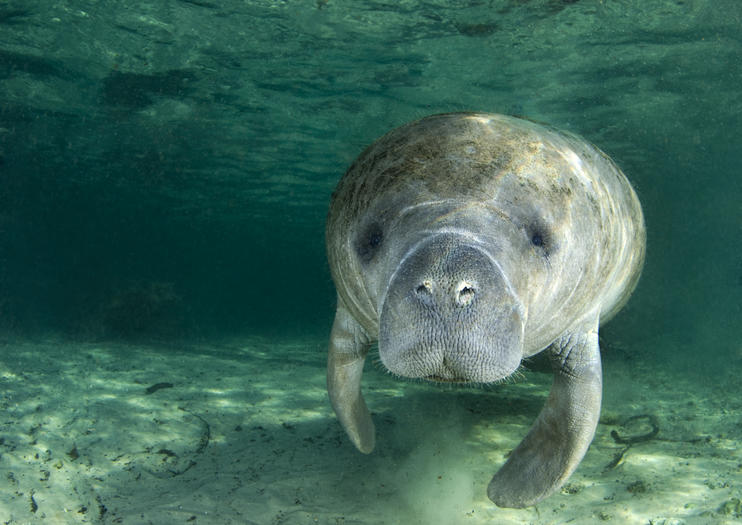 The warm water is what attracts the large seal-like manatees during cooler weather when temperatures in open waterfall. Being a tropical animal, manatees cannot survive long periods in water temperatures below 68°F. By late December, over 100 of these giant “sea cows” will have congregated around the springs in Kings Bay. The refuge is critical habitat for 15 to 20 percent of the U.S. manatee population and is one of six naturally occurring warm water refugia in Florida, places with climates unaffected by outside changes.

The clear water, excellent fishing, and opportunities for manatee watching are major attractions to divers, snorkelers, and boaters among residents and tourists alike. Dive shops, marinas, and motels cater to the interest in manatees, parlaying it into a $7 million annual hike in the local economy.

But swimmers interacting with the manatees constitutes illegal harassment if it changes their behavior. A study commissioned by the refuge found such instances last winter at the Three Sisters Spring on the edge of Kings Bay, a spot that has concerned the refuge manager for some time. During times when researchers were observing, they saw photographers cause resting manatees to leave their warm water resting places by flashing their camera lights in the faces of the animals. A tour guide was observed pushing a swimming manatee toward his party so they could all touch it. Another swimmer was seen accidentally kicking a resting manatee and another sat on a resting manatee’s head to pose for picture taking.

Boater and diving organizers typically fight access and speed limit restrictions, but local dive shops sensed the inevitability of access restrictions at Three Sisters Spring and have petitioned the County government to establish a sanctuary in a move they say will head off federal involvement in a “local matter”. As of this writing, the county refused to take action and referred the petitioners to city authorities for further consideration.

Since compatibility concerns were raised in the early 1990s (the incompatibility of recreational activities with manatee protection was one citation in a 1992 lawsuit), seven seasonal sanctuaries have been declared by the refuge in Kings Bay between November 15 and March 31. They are water areas for manatees to rest in where no entry is allowed for any purpose. At the popular King Spring sanctuary, access to the spring to observe the manatees is provided through one small corridor in the sanctuary set aside for divers and swimmers. Even though there can be 500 to 600 divers a day on weekends, the refuge manager is pleased with the way the sanctuaries and new access corridor are working. “Whereas before,” says the refuge manager, “anglers would fish right over the main spring, now all (observers) are free to go in safely, maybe 40 at a time.”

The sanctuaries are marked with buoys and motorboat speed limit areas are posted with idle and no-wake speed markers. Slow speeds are designated in Kings Bay for an even longer period of September through April to cut the high incidents of manatee injuries and deaths from collisions with boats or being sliced by motorboat propellers. Speed limits in manatee areas are set throughout the state, but even so, in 1996 alone, 60 losses were reported in Florida boating accidents due mostly from non-compliance with established manatee zone regulations.

Crystal River NWR is the product of citizen action and acquisitions by The Nature Conservancy which was purchased later by the Fish and Wildlife Service with appropriations from the Land and Water Conservation Fund. The refuge was established in August 1983.

Support among local citizens of the densely developed Crystal River area was nil, however, when the refuge purchased waterfront property for a headquarters and contact station. Voluntarily applying to change the zoning of the residential property (federal and state governments are not subject to local zoning), the refuge was hit with strong opposition, a denial of the zoning request, and arrest warnings if an office was opened. The office was nevertheless opened, the police did not come, and rezoning for government use was granted at a later second hearing. The refuge office is now an accepted part of the upscale community.

But the headquarters issue was insignificant when compared to another problem bemoaned by residents and tourists alike; increasing murkiness of famous Kings Bay water. The official explanation is muck and silt being deposited from storms, fertilizer runoff, and even wastes from manatees that get stirred up to cloud the water. Inter-governmental planning finally resulted in the city, county, and state cooperating in a $400,000 cleanup project in the summer of 1997 between manatee seasons. The refuge manager issued the required permit and kept a watchful eye on the barge and what was called the onboard”giant shop vac” to make sure the few manatees present were not harmed. No one, however, is sure how long the lasting effects of the vacuuming will be.

The 30,000-acre Chassahowitzka NWR some 9 miles south was established to protect wetland habitat for wintering ducks and coots, but their general decline has increased the importance of the refuge for manatees during the summer when they use the tidal bays, creeks, and rivers for feeding and birthing. The marshes, swamps, shallow bays, and tidal streams of the refuge are under the care of the Crystal River NWR staff who are concerned mostly with enforcement of public use restrictions to prevent wildlife disturbances. The complex estuarine habitat supports a significant variety of animals; 250 bird species including wintering laughing gulls, both brown and white pelicans, and loons; 40 species of reptiles and amphibians including alligators and gopher tortoises; and at least 25 mammal species.