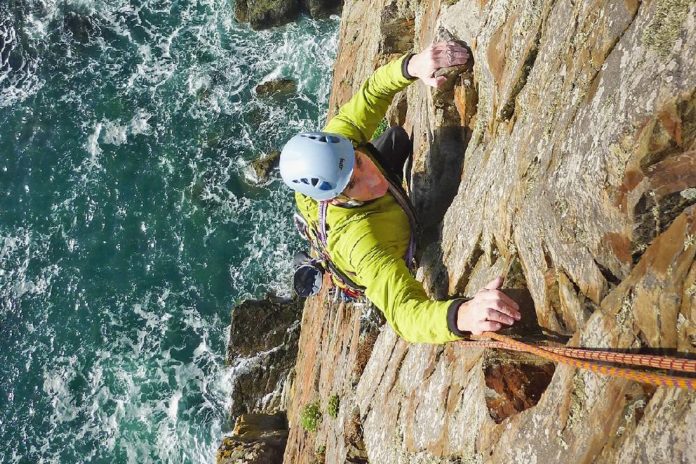 Anchor. The point where a climber’s rope is securely attached to the rock.

Backstep. This foot technique uses the outside of the shoe on an edge.

Barndoor. A poor example of balance. When the climber loses grip with the hand and foot on one side and they fall sideways as if on a hinge of the opposite hand and foot.

Belay. Use of a rope to protect a climber against a fall. A climber can be belayed by another person, or be climbing alone, using an advanced technique called a self-belay.

Belay devices. A device used by the belayer which acts as the brake on the rope. Some examples are figure 8’s, ATC’s, and GriGri’s.

Bivouac. A camp, or the act of camping. On a big wall, camp can be made on a natural ledge or an artificial one, generally an aluminum and nylon cotlike device called a portaledge that hangs from one or more anchors on the wall. Also, “Bivy”.

Bolt. Literally a bolt drilled into the rock face.

Boulder. A style of climbing which involves climbing only at a height the climber feels comfortable jumping to the ground.

Bucket. A large hand hold. Feels as secure as a rung on a ladder.

Carabiner. An oval or D-shaped link of lightweight aluminum or alloy that serves as the climber’s all-purpose connector.

Center of Gravity. It is basically the middle point of their body. However, if for example you put your arms out to one side, it will move to one side.

Chimney. A wide crack that accomodates (most of) the body of the climber.

Clean. The act of removing any non-fixed protection from the rock.

Crank. To pull on a hold as hard as you possibly can.

Crater. To fall and hit the ground pretty hard.

Crimper. A very small hold which allows only finger tips, if that.

Crux. The hardest move, or series of moves, on a climb. The rating of a climb is generally that of the most difficult move.

Deadpoint. A dynamic move which involves precision movement in order to catch the hold at the peak of the move before momentum waivers and gravity starts taking over.

Edging. Climbing technique when climber places edge of shoe precisely on top of a hold or unconformity on the rock. The opposite of smearing.

Figure Eight. A device shaped like an 8 used for belaying and rappelling.

Free Climbing. Climbing using only hands and feet to move upwards. Unlike Aid Climbing, free climbing uses the rope and gear only as protection against a fall, not as a ladder for upward movement. This method also stresses the use of gear that is temporarily placed in the rock for protection by the leader, and then removed by the second climber.

Haul Bag. Large and robust bag used to haul food, water, climbing gear, sleeping bag, and more up a big wall. Also known as “the Pig” since it is comparable in size and possibly in weight.

Indoor. Public climbing gyms and homegrown climbing walls have been around for about a dozen years now. These artifical environments substitute the bumps, cracks and other irregularities found in natural rock with a vast assortment of cast fiberglass holds. The holds, some as small as silver dollars and others as large as a gallon milk jugs, are bolted to plywood walls in random patterns. The walls themselves can be sloped in or out and arranged to form inside and outside corners, overhangs, cracks, and other common climbing situations. See the section on Albuquerque’s Rock Gym for more information about indoor climbing.

Jumar. Jumar is the method of climbing a rope using ascending devices that can be quickly attached and then loosened from the rope. Jumar is the name of the device (sliding a knot of rope or webbing up a rope is called Prusiking, after Dr. Karl Prusik); Jumaring is the act of ascending the rope.

Layback. A climbing technique where hands and feet work in opposition as one scales a crack or flake.

Mantel. A climbing move which looks like a small child climbing up to the kitchen counter. Hand(s) are on ledge, one foot comes up, as you rock over one hand with your elbow locked.

Mountaineering. At one end of the spectrum, mountaineering can include peak bagging, where little or no technical skills or equipment are needed to reach the summit of a mountain. It can also include full-blown expeditions to the highest peaks and the worst weather conditions on Earth. Generally, though, mountaineering adds specialized ice climbing skills and gear to those of rock climbing. Mountaineering also tends to be destination oriented.

On-Sight. Similar to Flash which means climbing without any falls. The difference being it is the first time the climber has ever seen the route.

Pitch. The section of rock between belays. Generally, pitches are no longer than the length of the rope (165 feet). Many sports climbs are set up so that their anchors are only ½ the length of a standard 165-foot rope from the ground so that climbers need only a single rope in order to be lowered or to rappel off the climb.

Quickdraw. A pair of carabiners connected with a short piece of webbing. A quickdraw is used to quickly connect a climber to a piece of pro or a permanent anchor.

Rack. The full set of gear needed to climb a route.

Rappel. Using a rope to descend from a climb. Modern rappels are generally done with a rappel device, which creates friction on the rope to help control the descent. Also called abseiling.

Redpoint. When a climber has led a climb from top to bottom without weighting the rope or gear. Also called a clean ascent. In the 1980s, German climber Kurt Albert marked climbs which he had done with no falls with a redpoint at their base.

Sidepull. Vertical slot handhold which is pulled on from the side instead of downwards like most holds.

Simul-climb. When both the leader and partner are both climbing at the same time, connected by a rope. This is done one easy terrain, or if the rope is too short to reach a belay. Many times simul-climbing is done using a running belay (the leader places protection, which is removed by the second) rather than fixed anchors at the end of each pitch or rope length.

Smearing. Climbing technique in which the climber attempts to stand on the rock by getting as much friction as possible between his shoe and the rock. Generally, this involves placing the sole or toe of the shoe directly on top of the hold or rock surface, then pushing and twisting the foot. The opposite of edging.

Soloing. When a climber ascends without a partner, rope or equipment to protect him from a fall. A “Rope Solo” is when a solo climber uses a rope to self-belay. “Simul-Soloing” is when two climbers solo together without the benefit of a rope.

Sport. Sport climbing is different from traditional in that the climber depends on fixed bolts rather than removable protection. Sport climbing routes often follow seemingly impossible paths, sometimes straight up huge, smooth rock walls, sometimes far out on horizontal overhangs. The emphasis in sport climbing is usually more on technique than topping out. Falls are frequent, though seldom serious, as climbers constantly push the limits of gravity and ability.

Top Roping. Pre-protecting a climb from above. The belay for a top roped climb can either be from the top of the pitch or the bottom. Climbs can be led, then top roped or protected by hiking to the top and fixing the anchor.

Trad. Trad or Traditional climbing requires a leader to place his own protection, rather than merely clipping into bolts. The term gained popularity in the late 1980s with the development of Sport Climbing routes-climbs that were pre-protected with bolts.

Traditional. Traditional rock climbing involves the use of ropes and temporary anchors to add a degree of safety to the sport. As the lead climber ascends the rock, he or she inserts of an assortment of metal anchoring devices, known collectively as protection, into the cracks and crevasses at points that may be anywhere from a few feet to several yards apart depending on the difficulty of the route. With the protection securely in place, the climber then uses a carabiner to attach the rope. Once the rope is clipped to a piece of “pro,” the belayer below is responsible for tending the rope and stopping the climber in the event of a fall.

Undercling. A hand hold which is “upside down” and is used by pulling up against it instead of pulling down.

Whipper. A fall, usually a very long one.