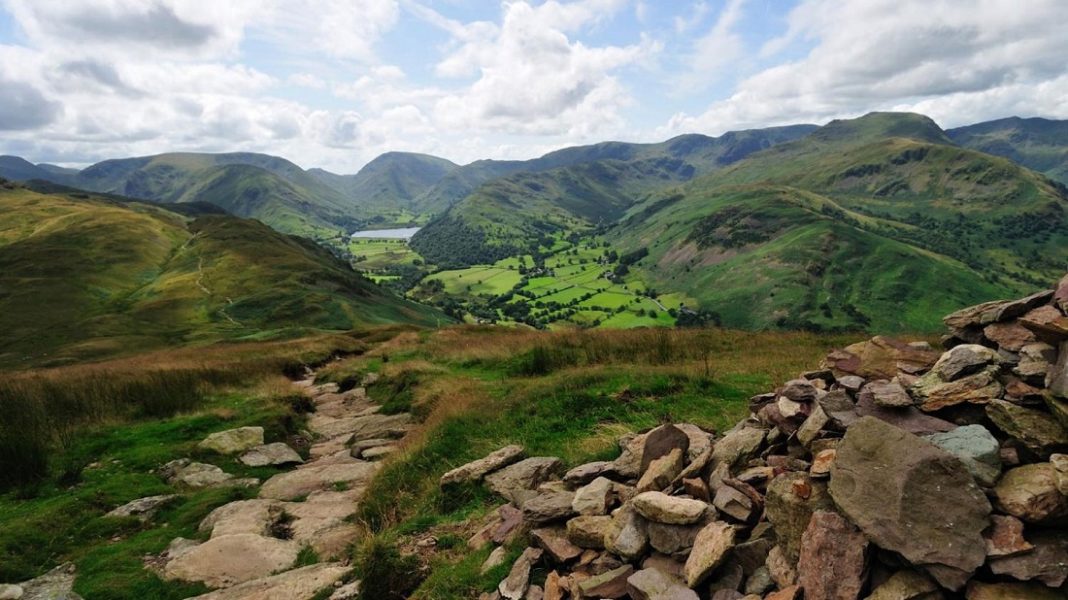 Start by getting your boots wet in one sea. Walk for a while. Several weeks — or months — later, wash off the trail dust in a completely different body of water. There’s nothing quite like walking across an entire country to give a long-distance hiker a sense of achievement.

The problem with the good old U.S. of A. is that it’s just too big. Plus there’s all that flat stuff in the middle. Our best-known trails don’t run from sea to sea; they follow more scenic north-south routes along mountain chains. A few hardy souls have walked the breadth of the country — there’s even an American Discovery Trail to try to follow. But for most Americans, walking across a country means walking across some other country.

The 192-mile long Coast-to-Coast, which crosses northern England, including the Lake District, the Yorkshire Dales, and the North York Moors, is one of Europe’s premier sea-to-sea walks. Another is the 212-mile long Southern Upland Way, which runs through southern Scotland’s hills and lochs. And the approximately 600-mile long Pyrenees High Route, which follows the sharp and serrated Franco-Spanish border from the Atlantic to the Mediterranean.

Let’s set the stage. Raining, of course. Muddy, which is why even aristocrats wear those green rubber boots called “Wellies.” You’ve just finished climbing over hill and dale, and it’s the end of the hiking day. What have you got to look forward to?

If you’re a veteran of American trails, you might expect some combination of the following:

But this is England, where things are a bit more civilized. So think again.

Your day ends at a small village where you have a reservation at a B&B. A pot of hot tea awaits. You’re shown the sitting room and the dining room, where tables are set for breakfast (cloth napkins, of course). Your room is furnished with clean linens. A steaming hot bath is drawn. Dinner’s at the local pub, but not before you have your pint of beer — a different brand each night, if you like.

As for food, I know all the jokes. “The English conquered the world in search of a good meal,” chortles my father, who (it should be said) has been happily eating my English mother’s cooking for forty-some years. Maybe what they say about hiking appetites is true: After a hard day of hill walking, you’ll eat anything that doesn’t run away. But see for yourself: beef in beer sauce, duck, roast beef, and Yorkshire pudding, fresh fish and chips, even lasagna and curry. British pub food has gone international. It’s also hearty, tasty, filling — in other words — just what the hiker ordered.

The result: A hike across England could spoil you forever.

The Coast-to-Coast Walk is England’s most popular footpath. Cutting across the north of England near the country’s narrowest part, the trail starts at the seaside town of St. Bees on the Irish Sea, climbs into the Lake District, then crosses the Yorkshire Dales and the North York Moors before ending at Robin Hood’s Bay, a picturesque village on the North Sea.

Hiking with an English accent is a different experience for Americans. There is no wilderness as we know it. Camping is something you do at a campground. And no matter where you look, you’ll see a flock of sheep.

But the English have some ideas of their own that we would do well to borrow, like their system of public footpaths, which pass by easement through private lands. Throughout the walk, you’ll see hundreds of little wooden signs pointing the way to these little paths, which might go from village to village or just across a field. 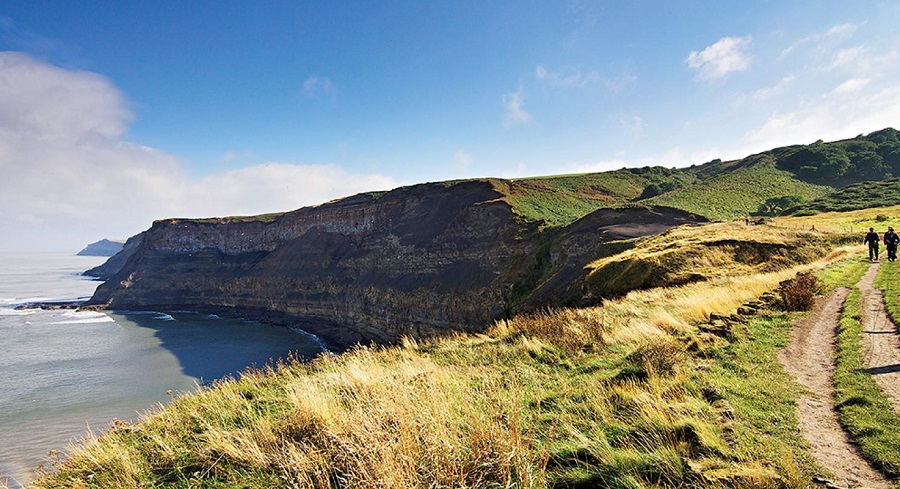 It was by linking together such rights-of-way that Wainwright,  developed the idea of a coast-to-coast walk that would spend as little time on roads as possible. The thousands of people who walk all or part of his trail each year is a measure of his success.

As for what you’re about to do, they call it hill walking. Sometimes, fell walking. Never hiking, climbing, or mountaineering. But it’s worth considering the English penchant for understatement. These are, after all, the people who refer to dangling by from one crampon on an ice slope as a”bit of a tricky spot.”

What’s the big deal, you ask? After all, we’re talking about elevations of 2,000, 2,500, 3,000 feet, max. If you’re used to the lung-busting altitudes and multi-thousand-foot elevations of, say, the American West, chances are that you’re not inclined to take a three-thousand-foot peak seriously.

Get ready to adjust your attitude about altitude.

Okay, these aren’t the Alps we’re talking about. But they are most definitely mountains. Perhaps they have a grander appearance than their elevations would suggest because they are almost completely deforested. Maybe if they were covered with a soft blanket of deciduous trees, they wouldn’t look so fierce, craggy, forbidding, stark. But centuries of woodcutting for housing, shipbuilding, and fuel made them bare; more centuries of grazing kept them that way. The only large patches of green you’re likely to see are the skirts of carefully planted conifer plantations that sit in orderly formation along the lower slopes, their rows and columns as orderly as a battalion of soldiers.

The Lakes District is enclosed as one of England’s national parks. National Parks are an American idea that has made its way back across the Atlantic, but on the other side of the pond, it has been adapted to fit the realities of the English countryside. Farms, small communities, pastures, tourist facilities, and undeveloped highlands all coexist within the park boundaries. English national parks aim to preserve not only the natural features of an area but also its traditions. Here, that means restoring some of the centuries-old dry stone walls that march across valleys and mountains, contour lines notwithstanding.

If you’ve got extra time, plan to spend it in the Lakes. Hundreds of miles of public footpaths wander around the lakes and over the mountains (oops — hills). But be warned: annual rainfall exceeding eighty inches, near-constant mud, and steep trails make for some challenging walks. Plan your mileage accordingly.

The middle third of the Coast-to-Coast Walk is characterized by history, high, bleak hills, and the contrasting lovely valleys of the Yorkshire Dales. Maps and guidebooks will alert you to ancient artifacts visible from the trail, but keeping your eyes open will do the trick, too.

On Roman roads, you’ll follow in the footsteps of soldiers who marched here some two thousand years ago. Off in a field, you’ll see stone circles made even earlier for reasons still mysterious. And atop a hill known as Nine Standards, nine huge stone cairns guard the ridge, visible for miles. Who built them, and why? No one knows. 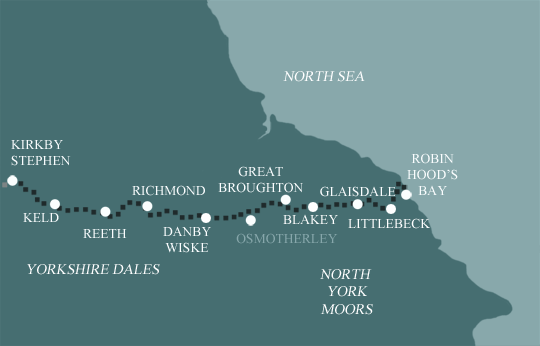 The terrain varies from the high hills (muddy in wet weather) to the pretty valleys of the Yorkshire Dales, protected as part of another national park. The small village of Reeth is the center of park activity — there are a small office and interpretive center where you can learn a little about the sheep industry that is traditional to the area. Next up is Richmond, only eleven miles away: You can use the balance of a short hiking day to visit its eleventh-century castle. 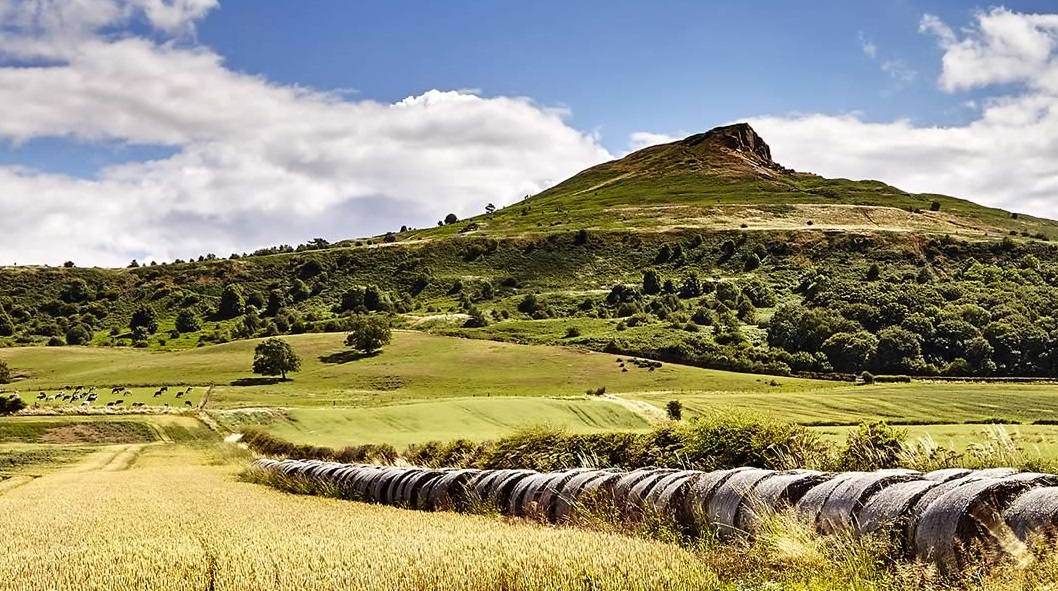 The first part of this section is flat — some would say monotonous — through farmlands. Then the path climbs into the Cleveland Hills and enters the third national park on our route, the North York Moors. If you’ve read Wuthering Heights, you’ve got a pretty good idea of what to expect in the next fifty miles. The wind-sheared high moors are exposed and harsh, but they have a stark and wild beauty.

There’s quite a bit of variety in this section. The highlight is the Cleveland Hills, where for several miles the Coast-to-Coast is contiguous with the Cleveland Way, one of England’s official long-distance walking paths. The route mostly winds through high heather moors, descending into various towns, where you’ll pass an old toll road and one of England’s steam train lines (still in service as a tourist attraction and well worth a detour) before finally arriving for a grand finale along the rocky cliffs of the North Sea.

The Coast-to-Coast Walk runs 192 miles through northern England from St. Bees on the Irish Sea to Robin Hood’s Bay on the North Sea. Both are easily accessible by public transportation. Trains run to St. Bees and to Whitby (a few miles from Robin Hood’s Bay; buses and taxis run between them).

Unlike England’s other famous long-distance walks, the Coast-to-Coast is not an official trail. Therefore it is not always marked (in fact, in the Lakes, it is never marked). For the most part, it follows public footpaths and rights of way. There is some road walking, especially in villages and towns. Map and compass skills are essential. I wish I’d brought a GPS because when mist shrouds the moors and footpaths go every which way, it can be hard to find your bearings. You can also get confused climbing over the hundredth stone wall of the day or turning onto the correct public footpath since there are often several among which to choose.

The Ordnance Survey has put together two strip maps of the trail at a scale of 1:25,000 (Sheet 33 covers St. Bees to Keld; Sheet 34 covers Keld to Robin Hood’s Bay). However, if those are the only maps you have, you’ll find that they cover too narrow a corridor to provide information about alternate routes (and if you get lost, you might wander off the maps in short order). The 1:50,000 maps are listed in the available guidebooks, of which there are several.