What is the best windbreaker for protecting you from a cool morning breeze or a mountaintop gale? We identified 10 of the leading jackets available on the market in 2019 and put them through months of testing to determine which was the best. We affirmed our conviction that these super thin and lightweight jackets might just be the most important component of any high tech layering system, and are perhaps the most useful outdoor garment that you can own. We wore these 10 jackets daily while running, biking, hiking, climbing, camping, fishing, and while simply chilling outside on summer and fall days. Keep reading to find out which ones are the best overall and for a variety of different activities. 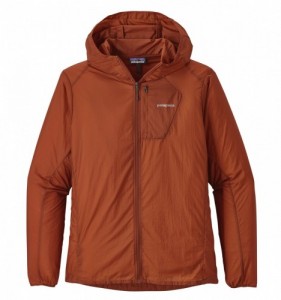 Retailing at a low $99, the Patagonia Houdini, without doubt, presents the best value if you want a performance jacket at a low cost and is the best overall jacket in our opinion. In reality, $99 is not very cheap for a piece of fitted nylon, but in the case of this review, it can be had for a few green bills less than the other options. We also think the Houdini is the best windbreaker jacket choice for rock climbers who need a little security blanket while attempting long climbs on the shady Middle Cathedral Rock in Yosemite Valley or the South Chasm View Wall in the Black Canyon.

The entire jacket stuffs into its chest pocket. It easily clips to the back of your harness. This jacket will inspire you to cheat on the hardman mantra of “a rope, a rack, and the shirt on your back,” (and a Houdini!) and ensure that you aren’t left shivering at the belay when the inevitable afternoon winds pick up. For the 2017 season, Patagonia re-energized the color palette, including new hues like campfire orange. Fortunately, no price “updates” coincide with the color overhaul. 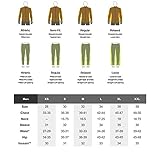 While we found it a bit too insulated for mid-summer use, it was still one of the top scorers in our comparison testing, and the jacket we most often reached for as summer faded and cool temperatures started to dominate.

How many times have you prepared for a short or medium length bike ride or run and stared at your hydration pack, wishing you didn’t need to wear it? How many times did you end up wearing it anyway, simply because you needed to bring a jacket? Enter the Outdoor Research Tantrum, the perfect light windbreaker jacket for either running or biking, that packs into a tiny pocket with elastic waist belt, allowing it to be carried anywhere without the need to bring a pack. We wish every jacket in this review had this feature because time and time again we reached for this jacket when we simply didn’t want to bring a pack. Not only is it simple and easy to carry along, but it is made of super lightweight, stretchy, highly breathable material that moves perfectly with your body. While it really won’t protect you from much rain, this was still our favorite wind shell to bring along on peak climbs, short to medium length runs, and mountain bike rides.

Arc'teryx Squamish Hoody
While we wouldn’t use it for running or biking, and it does clock in as one of the most expensive that we tested, we can think of many situations where we would happily save weight and bulk with this versatile layer.
View at Amazon

The Arc’teryx Squamish Hoody looks and feels much like their award-winning hardshell jacket, the Arc’teryx Alpha FL, except that it is much thinner, lighter, and costs a whole bucket of money less. Designed with an adjustable storm hood, drop hem, and Velcro adjustable wrist enclosures, this jacket comes with all the features of a hardshell — minus the Gore-Tex. While we certainly wouldn’t wear it out into a heavy rainstorm, or on a nuking powder day, we would stuff it into its own tiny chest pocket and save a ton of weight and space on those long spring days in the backcountry where the shell is only going to be used briefly on the descents. We also debated calling this award, “The Best Wind Breaker to Layer Under,” as no other “jacket” in this review serves as a better lightweight outer shell. While we wouldn’t use it for running or biking, and it does clock in as one of the most expensive that we tested, we can think of many situations where we would happily save weight and bulk with this versatile layer. For this Spring, Arc’teryx gave this jacket a new array of fresh colors, too.

First and foremost, the purpose of a windbreaker jacket is to protect you from the wind. They are typically made of lightweight nylon that is tightly woven to limit the amount of air that can make its way through. Windbreakers are typically worn directly over a t-shirt or other thin under-layer, although depending on the fit and design, they can also at times be used as an outer shell over the top of warm layers. Breathability is another important quality for a successful windbreaker, as these layers are common for high-intensity activities where there is a need to release excess heat and sweat. While they might protect you from a light rain or drizzle, they are not really designed to be waterproof, like a dedicated rain jacket or waterproof/breathable hard shell. Check out our Best Rain Jacket for Men or Best Hardshell Jacket for Men reviews if you are interested in a more weatherproof layer.

The Need for a Wind Breaker Jacket

The advantages of a windbreaker over other forms of outer or thermal layers is that they are super lightweight (the lightest in this review weighs a mere three ounces!), they are extremely packable (all but one reviewed here easily fits into its own pocket), and relatively cheap compared to rain jackets, hardshell jackets, or fleece jackets. For almost any outdoor adventure from spring through summer and into fall, we find that we tend to reach for the windbreaker as our go-to first layering option (unless, of course, it’s raining or snowing).

In order to be able to tell you which are the very best windbreaker jackets, we rated them based on five separate metrics: wind resistance, breathability and venting, fit and functionality, water resistance, and weight and packability. Read on below to find out more about each metric, how much we weighted them, and what were the best and worst performers for each category.

The Marmot Ether DriClime Hoody was the most wind resistant jacket, aided without doubt by its interior liner. Also scoring well was the other lined jacket, the Mountain Hardwear Ghost Lite Pro. Our third top scorer was the Patagonia Alpine Houdini, whose 2.5 layers waterproof/breathable membrane was thicker and heavier than any other in this review. The lowest scorers were all among the most breathable in the review, represented by the Outdoor Research Tantrum, the Sierra Designs Exhale Windshell, and the Arc’teryx Squamish Hoody. It is, of course, worth noting that despite being comparatively poor in terms of wind resistance, we felt that they still did a good job at this task. We weighted wind resistance as 30 percent of a product’s final score.

While some jackets like the Arc’teryx Squamish Hoody or the Outdoor Research Tantrum had very breathable fabric, others like the Rab Windveil Jacket and the Salomon Fast Wing Hoodie included armpit vents, mesh hand pockets, and venting buttons across the front to hold the jacket together while allowing you to move with the front zipper completely open. The Marmot Ether DriClime Hoody and the Mountain Hardwear Ghost Lite Pro did a great job of helping wick away moisture to allow it to breathe through their outer layers and mesh pockets and underarm vents. Unfortunately, one jacket, the Patagonia Alpine Houdini, proved to be very wind resistant, but also not very breathable, and really didn’t include any handy venting features. It was our lowest scorer for this metric. Like wind resistance, we chose to weight breathability as 30 percent of a product’s final score.

Important for any outdoor garment is whether it fits well for its intended purpose, as well as considering whether all of the features work as they were intended. When it comes to fit, we checked to see if the sleeves were long enough, if the hood fit over our head well, and whether the jacket was too baggy or too tight. We took into consideration whether it was designed to be used as a single layer, in which case we expected it to fit sleeker and closer to the body for optimal performance. On the other hand, if it was obviously meant as an outer layer, then we wanted to see if it could be layered beneath.

When looking at functionality we assessed based on whether all of the included features worked well. Some negative points came for things that annoyed us.

As they are not rain jackets, these windbreakers focus on other attributes before water resistance, and so that is not a top priority in their construction.

The Patagonia Alpine Houdini, with its 2.5 layer waterproof/breathable membrane, was the clear winner when it came to water resistance. One could argue that we should have designated it as a rain jacket, but we wanted to see how it compared head-to-head with the standard Houdini. Other impressively water resistant jackets were the Rab Windveil and the Salomon Fast Wing Hoodie. Disappointingly low scorers were the Outdoor Research Tantrum and the Mountain Hardwear Ghost Lite Jacket. As water resistance is a nice feature to have in a windbreaker, but is certainly not specifically what these jackets are designed for, we only weighted this metric as 10 percent of a product’s final score.

The lightest windbreakers that we tested are as light as feathers. Weighing in at only 3.0 ounces, the Salomon Fast Wing Hoodie weighs roughly the same as three slices of bread, a small apple, or a deck of cards. That’s not very much! On the other end of the spectrum, the Mountain Hardwear Ghost Lite Pro checked in at 9.5 ounces, which is still only slightly over half a pound. These jackets are truly exceptionally light.

The Salomon Fast Wing Hoodie was the lightest jacket in the entire review, but it was nearly matched by the Mountain Hardwear Ghost Lite Jacket and the Patagonia Houdini. The heaviest options were the two insulated windbreakers — the Marmot Ether DriClime Hoody and the Mountain Hardwear Ghost Lite Pro. The Outdoor Research Tantrum received the largest bump of two positive points for how easily it stuffed into its lower back pocket, and far more importantly how versatile and awesome the included waist strap was for carrying it without a pack. Most of the stow pockets came with a clip-in loop for attaching to a pack or harness if climbing. The Sierra Designs Exhale Windshell did not stuff in its own pocket, nor did it have a clip in or carrying method like the other jackets, so we deducted two points from its weight score. Overall, we weighted this metric as 10 percent of a product’s final score.

The breathable and protective Houdini is a perfect shell for high altitude in the summer. Nearing the top of Columbine Pass during a week-long backpacking trip in the Weminuche Wilderness of Colorado.

Choosing the perfect windbreaker jacket can certainly present a challenge. While all of the products we have reviewed here did a good job at protecting us from the wind, the complicating factor in determining which one will be the best for you is most likely your intended purpose. We have highlighted a number of different jackets as award winners for specific individual purposes to help you figure out which one is best for you. We hope that our windbreaker review and test results have helped you to make a decision on the best windbreaker to purchase.